118 people from the USA, UK, UAE, QATAR, and India recently were on a religious tour to Azerbaijan organized by Dook International. Bhagvat Katha was the heart of this trip. The group reciting Bhagwat Katha was the best thing for each individual in the group. The trip that started on the 9th of October and ended on 15th October became a memorable one for the entire group. The trip was organized for a religious group of Hindus. The trip was truly a good spiritual experience for the passengers. Let us take you through the journey of the entire trip from the beginning to the culmination.

The group arrived at the Baku Airport in the morning and then was transferred to the Pullman Hotel where they checked in. After a leisure time, they were taken for the city tour at Highland Park, where they had a great time. They came back to the hotel at 20:00 hours for dinner and overnight stay in the hotel.

Highland Park in Baku city is a great place to get a panoramic view. This is why the park is popularly known as ‘viewing square’. This is a cool place to take a walk especially in the evening, relax and enjoy the Caspian Sea view. There are cafes, restaurants and a cool breeze coming from the sea. All these put together make Highland Park one of the most favorite places in Baku for the tourists. 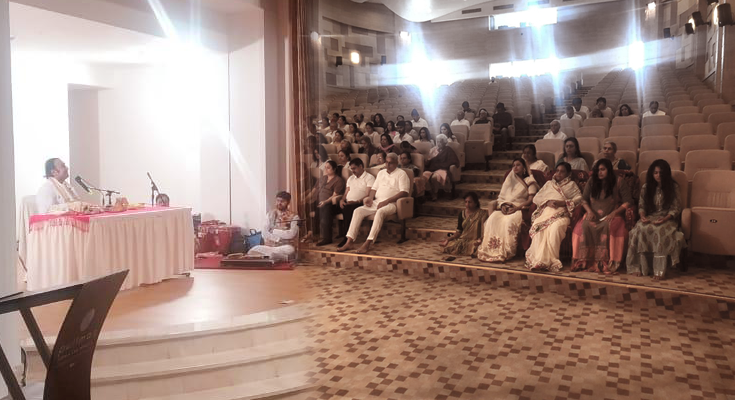 As the group was excited for the Bhagwat Katha, they got the opportunity to listen to the spiritual Bhagwat Katha Group after having their breakfast at the hotel. Bhagwat Katha started at 09:30 and went on till 11:00 hours in the morning at the banquet hall gabala. The first session was a great spiritual experience for every Hindu passenger from different countries. Bhagwat Katha recitation has been a popular tradition among Hindus. People listen to the Katha very carefully as there is a great life lesson in the thousands of years old stories. 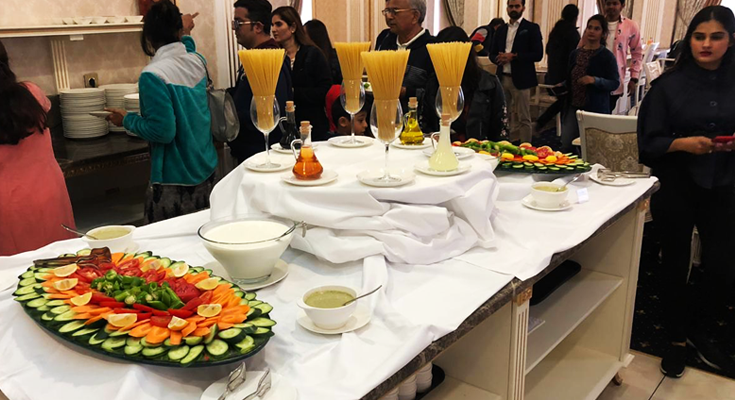 After an insightful session, the group was taken to the Old City of Baku tour and then after lunch, they all got a chance to visit Nizami Street, a very popular place in Baku, Azerbaijan. The day ended with a return to the hotel followed by dinner and overnight stay in the hotel. 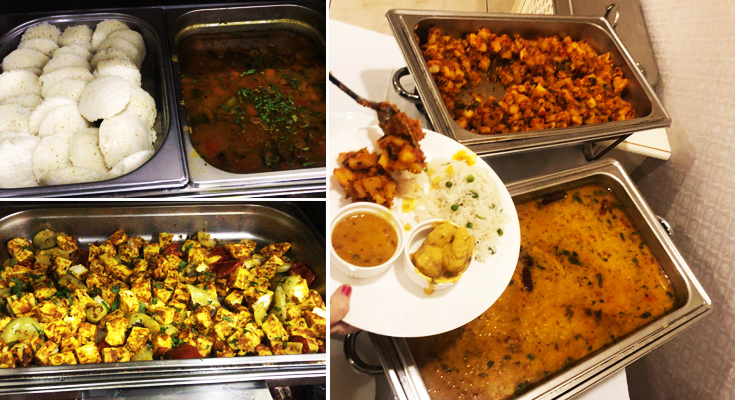 The Old City of Baku

The old city has its charm like old wine. The streets, the structures, the markets, the history, the look and feel all these make the old city an all-time beauty in Baku. This is also called the inner city of Baku. Historians say that history of Baku dates back to the 12th century while others say it goes back to the 7th century. The old city happens to be the first place in Azerbaijan to be classified as a World Heritage Site by UNESCO in 2000. The Inner Walled City is one of the few surviving medieval towns in Azerbaijan. It holds the characteristic features of a medieval town, such as the labyrinth of narrow streets, hammams (bathhouses), congested buildings and tiny courtyards. Maiden Tower and Palace of the Shirvanshahs are the biggest monuments of the Azerbaijan architecture, situated in the Inner City of Baku.

Like every historic city, Baku has a traditional and popular Nizami Street. People come here for shopping, visiting the street to witness the most popular place for shopping in Baku. You have small outlets, souvenir stores and supermarkets here. The group spent 2 hours from 15:00 to 17:00 hours to spend and buy something they liked from Nizami Street.

Day 3 - Bhagwat Katha Continues, So does the Sightseeing

On day 3 also the group on a Baku Tour had the privilege to listen to Bhagwat Katha in continuation of the previous day after breakfast in the morning. The group on a religious tour silently listened to the Katha and they must have carried a lesson or two from the Katha as well. 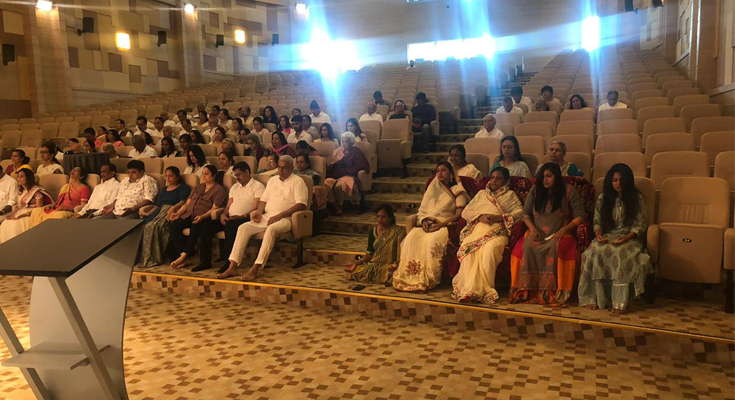 Then at 11:30 to 14:00 hours was the time to visit Fire Mountain and fire temple Ateshgah. Post lunch was the shopping time at malls followed by a return to the hotel, dinner and overnight stay at the hotel. 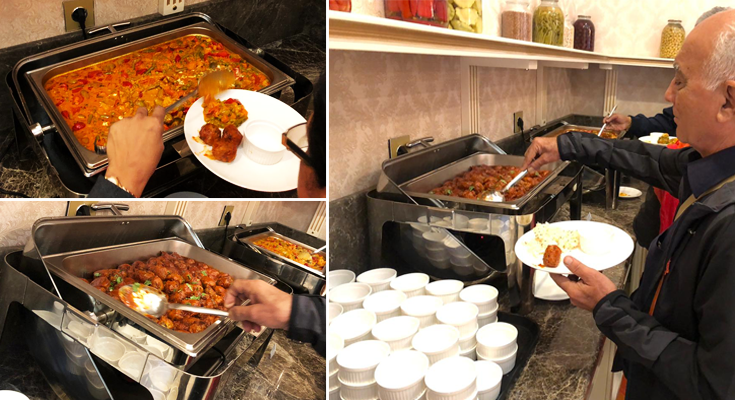 The group took selfies and pictures at ‘YANARDAG’ mountain. Yanardag also known as Fire or burning mountain, is a natural gas fire. This natural gas fire blazes continuously on a hillside on the Absheron Peninsula on the Caspian Sea 25 KM northeast of the Baku city. This burning mountain is different from nearby mud volcanoes of Lokbatan or Gobustan as Yanardag has no seepage of mud or liquid-like mud volcanoes have and so mud volcanoes don’t burn as steadily as Yanardag does. This mountain has several local stories surrounded by the formation of this place as well. Even today, both tourists and locals get amazed by the flames here. 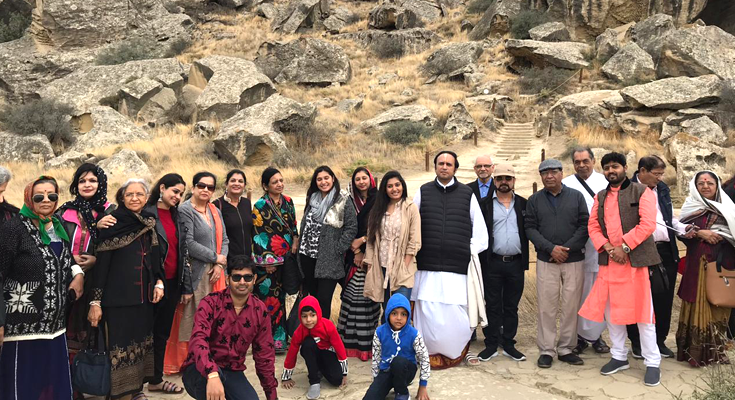 Baku has this Ateshgah which is often called ‘Fire Temple of Baku’. This is a famous tourist sight today in Surakhani town, a suburb in Baku, Azerbaijan. This fire temple is a place of significance for Hindus. The temple was used as a Hindu, Sikh, and Zoroastrian place of worship. This is a pentagonal complex with a courtyard. The complex was built in the 17th and 18th centuries but dwindled in the 19th century because of the dwindling of the Indian Population here. With natural flame going out in 1969 this was later turned into a museum in 1975. 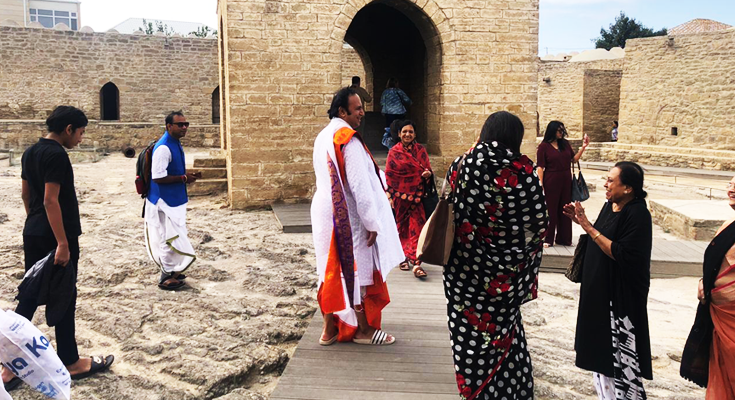 A spiritual session for the group continued on day 4 of the trip at the same time from 09:30 to 11:00 hours. Then the highlight of the day was visiting Gobustan and Bibi Heybat Mosque and post lunch there was a walking tour at the boulevard. After this, the group returned to the hotel, had dinner and then stayed overnight in the hotel. 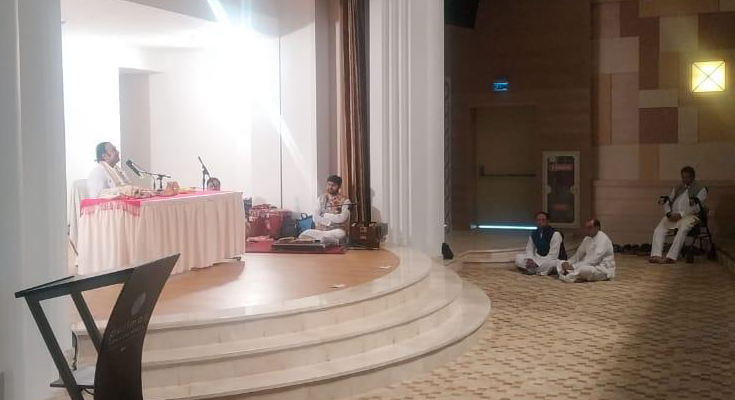 Gobustan National Park is about 64 KM southwest from the center of Baku on the west bank of the Caspian Sea. Gobustan is famous for its rock drawings. These drawings date back to 40,000 years. You can see a reflection of the activities of ancient people such as dance rituals, hunting scenes, carpentry and the images of animals here. 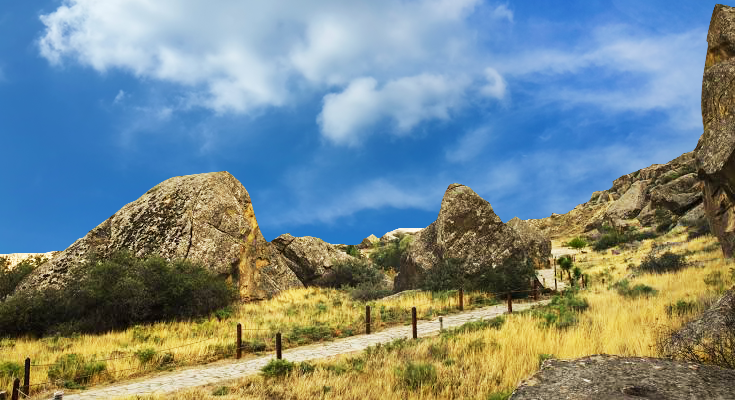 Bibi-Heybat Mosque is a historical mosque in Baku. Locally this is popular as the Mosque of Fatima and happens to be one of the prominent Islamic architecture in the country. Today it is considered a spiritual place for Muslims. Today the mosque is not only known as a spiritual center for the Muslims of the region but it is also quite famous monuments as a representative of Islamic Architecture in Azerbaijan.

Post lunch was the walking tour at Baku Boulevard. It is known as National Park which runs parallel to Baku's seafront. It is more than 100 years old. The square has often been the scene of public meetings, cultural gatherings, celebrations, ceremonies, parades, concerts and has lately become the venue for the city's extensive New Year celebrations.

This was a day for shopping. The group after breakfast headed for the yet another session of Bhagwat Katha at a banquet hall, Gabala. Guruji recited Sanskrit Slokas and translated them into the Hindi language. These slokas have a deep meaning which was well elaborated by the Guruji.

After the Katha Session, the day was dedicated to the shopping. Both pre-lunch and post-lunch the group had ample time to buy things and they did shop what they liked. The day ended with dinner and overnight stay in the same hotel. 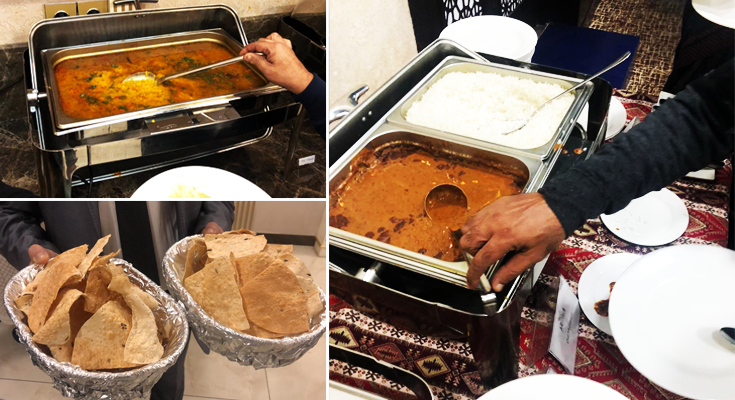 The group was taken to Gabala Tour where they had a great time for sure. Gabala district is a little over 200 KM away from Baku, where you can visit the most popular Nohur Lake. Gabala district has some great attractions other than Nohur Lake but all the nature lovers find the lake the best place to be. The place offers you panoramic scenes. You can soak some sun here as well for a relaxed time. Skiing is also an attraction here. Nohur Lake has become a popular recreation spot. It has a large tree-lined body of water reflecting the Greater Caucasus Mountains in its green-blue waters. 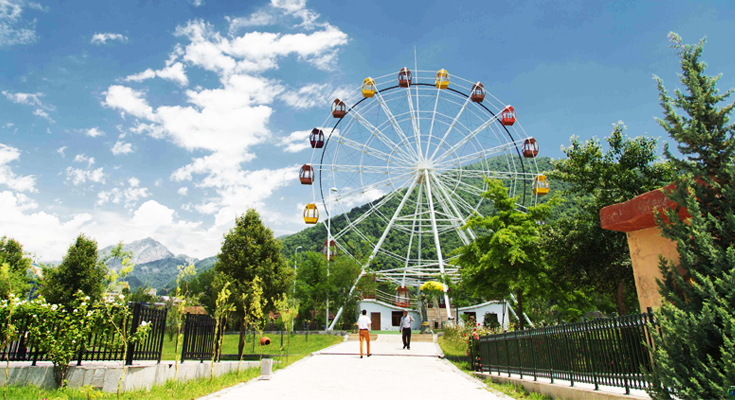 After having a great Baku religious trip, the group on the last day checked out after breakfast in the morning. Some people in the group stayed for a while for shopping and they had late departures the same day. The rest was taken to the airport at 14:00 hours and they had a journey back home from here with great memories of the trip.

Details of the Trip: