The Most Popular Central Asian Cuisines and Food

A Cheat Sheet into the Central Asian Food

Central Asia is a tourist hub spot, but the food was never the reason for most travellers. After its independence, most restaurants would only serve sloppy food which still has its influence from the Soviet. With years, it is improved with the opening up of many pleasant restaurants, open-air cafes, pubs, etc. which has unravelled the mystery of some of its cuisine names such as Lagman, manty, plov, beshbarmak which you will find in many of the cafes and restaurants.

The food of Central Asia resembles the Middle East in its use of seasonings, rice, vegetables, yoghurt, legumes and meats. There are also similar dishes to many other parts of Asian countries.

Most of the standard food of Central Asia is found in many restaurants such as Shashlik, Plov, Laghman, Shorpo, Manpar, Beshbarmak, Nan, and Salad and breakfast.

The main food and ingredient of Central Asia are Mutton, it's preferred over other meats. Big and healthy bottom sheep are preferred for their meat, fat and wool. 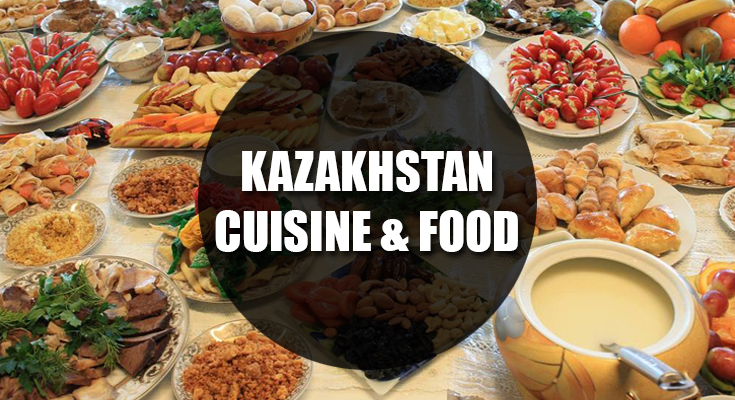 The traditional food of Kazakhstan always had Middle-eastern influence with mutton and horsemeat as its most common food. While it’s present-day cuisines include some influence of Russian, Uzbek and Korean food which is found mainly in the cities. People are usually welcome with kumys, shubat or aryan. Some of Kazakhstan's main cuisine & food are: 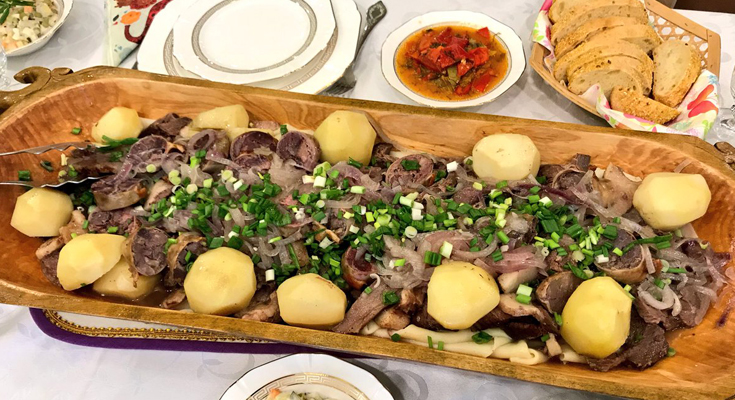 Beshbarmak is the traditional food of Kazakhstan. The term of its name means five fingers as the Turkish nomad use to eat this meal with their hands. The dish is made with boiled noodles, finely chopped meat and spiced with some onion sauce served in a big round dish. 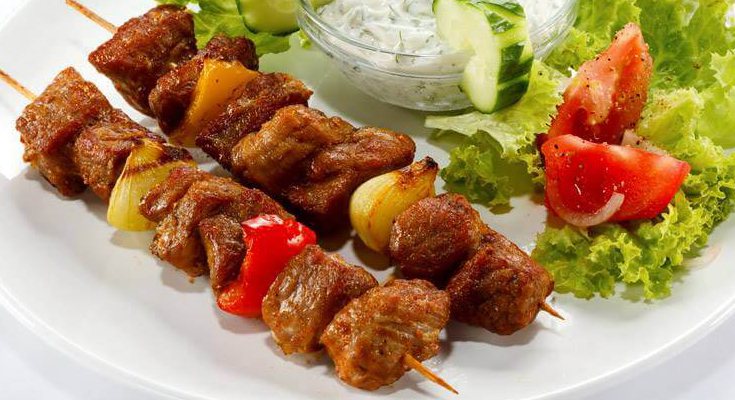 Shashlik is similar to shish kebab as it's a dish of grilled cube meat which is a common dish in Central Asia. It consists of meat cubes and some vegetables cooked over the fire. Shahslik is also cooked on skewers but completely different in taste from kebabs. 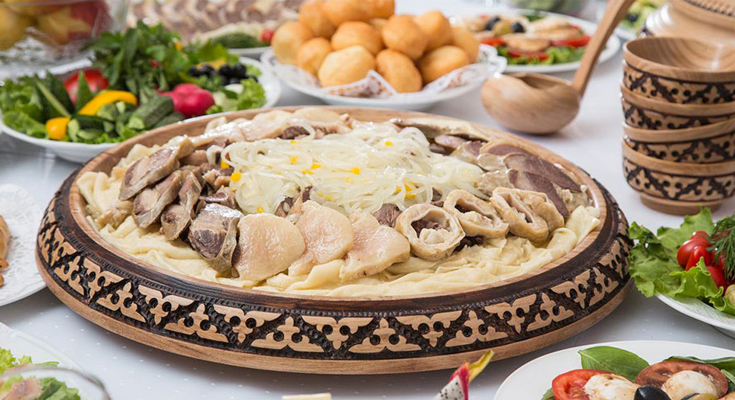 Kazy is a homemade horsemeat sausage which is made locally just from meat horse without any chemical additives. The sausage is stuffed in with meat, fat and spices such as garlic, pepper, zira etc. It can be sliced thinly and be eaten with various dishes such as naryn and plov. 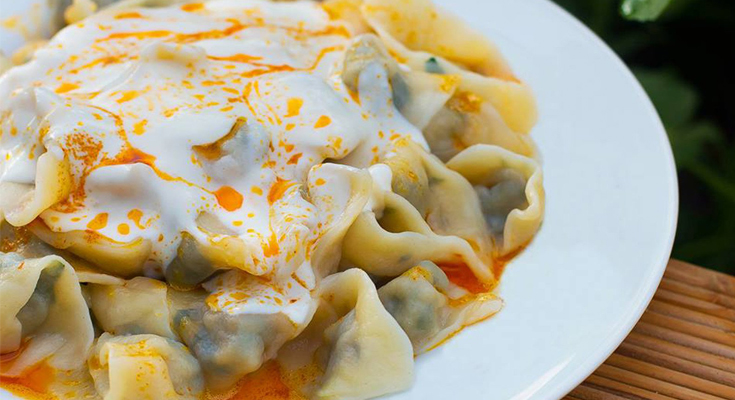 Manti dumpling is a popular cuisine in Kazakstan, Central Asia and South Caucasus which consists typically of a mixture of meat usually lamb or beef. The meat is stuffed in with an addition of squash or pumpkin with some black pepper in it and topped with some garlic or onion sauce. 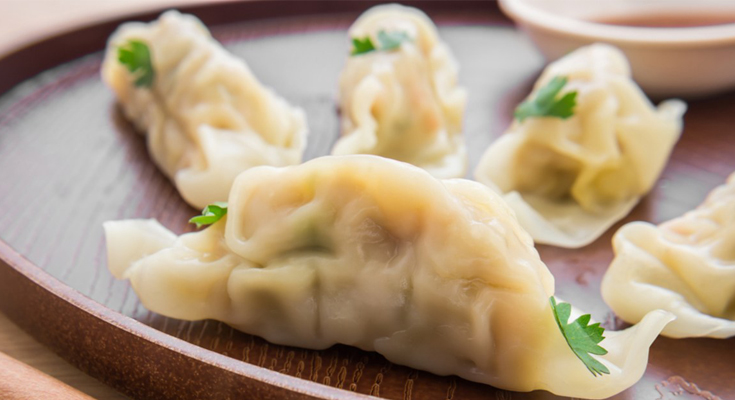 Originally, this dish is of Russian cuisine very popular in Kazakhstan which consists of a filling wrapped in thin dough. The filling consists of minced meat which can be meats of a different kind with various spices added to it such as black pepper, onion and garlic. 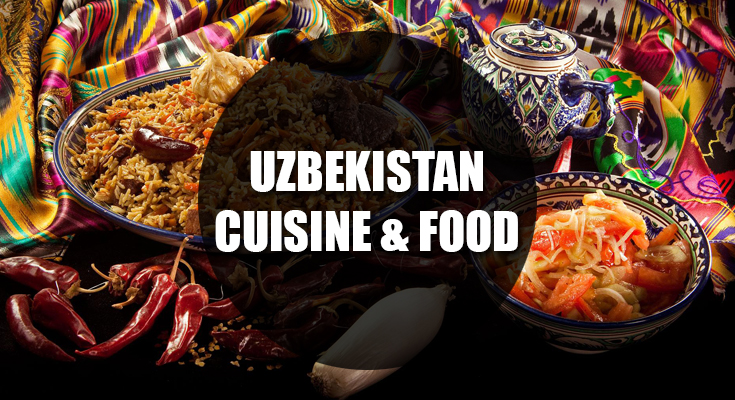 The cuisine and food of Uzbek have always been influenced by agriculture which makes bread and noodles a significant part of their cuisine. Amongst the meat, mutton is very popular meat. The ingredients used in their food vary with the season. Many of their recipes are centuries old and their food has been forming for centuries. Some of their native food is plov, buglama, dimlama, shurpa, mastava and many others which are well served on the tables of different parts of the world. Some of Uzbekistan's main cuisine and food are: 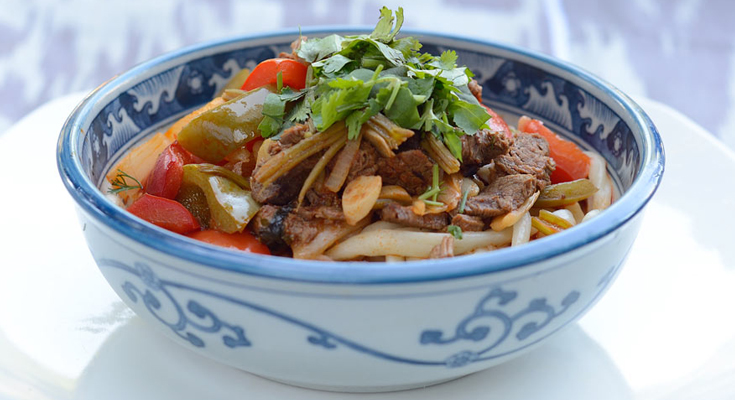 Lagman is a meat and vegetable noodle dish. It is one of the signature dishes of the Uzbeks served along with manty, plov, kebabs and samsas. There is a variety of Lagman made from different vegetables, meats and noodles. Lagman also comes in a non-soupy version. 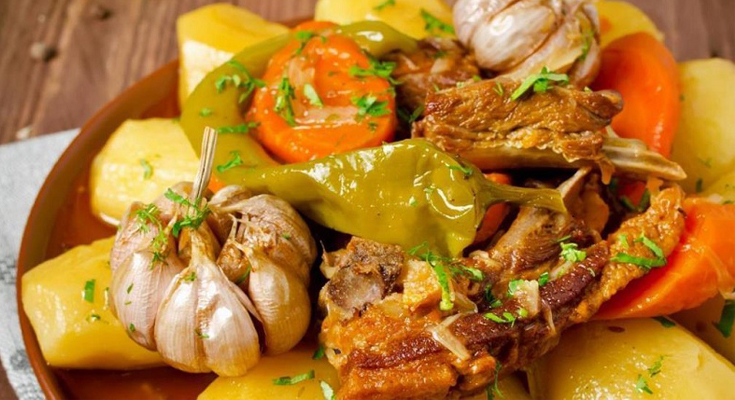 It is a Turkic stew made with combinations of potatoes, onions, vegetables and meats. Sometimes the dish is also added with some fruits. The main meat of this dish is either lamb or beef cut into large pieces and put to cook in slowly in their own juice. 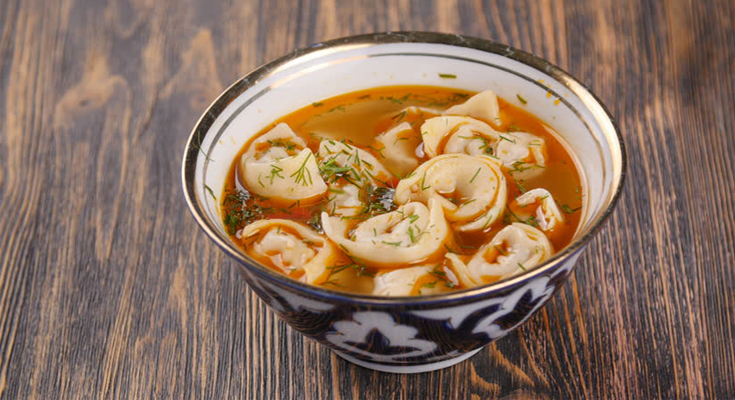 Chuchvara Soup is a dumpling dish soup popular in Central Asia and Uzbekistan. It is a flavoursome soup where dumplings are boiled in salt water and served with sour milk. The dish is seasoned with onion, pepper, tomato paste and sour cream. 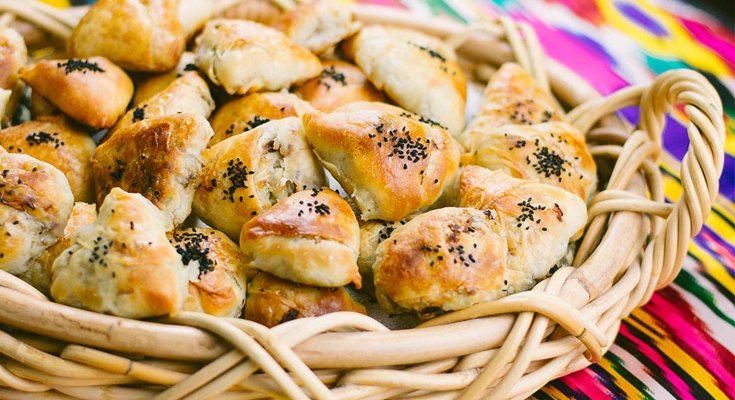 Samsa is a meat pastry baked in the tandoor i.e. a clay oven. It's a very popular dish in Uzbekistan and many other parts of Central Asia. It's triangular dough filled in with minced lamb, chicken or beef, onions and different kinds of cheese. The samsa also come with potato or pumpkin fillings. 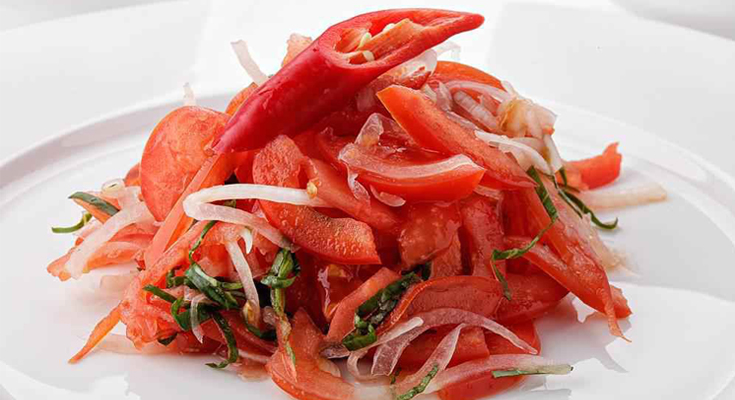 This is one of the most popular vegetarian dishes in Uzbekistan as the country does not have much to offer the diehard vegetarian. It's a traditional Uzbek salad dressed in a chopped salad with many fresh vegetables of tomatoes, onions, cucumbers, radishes and carrots. 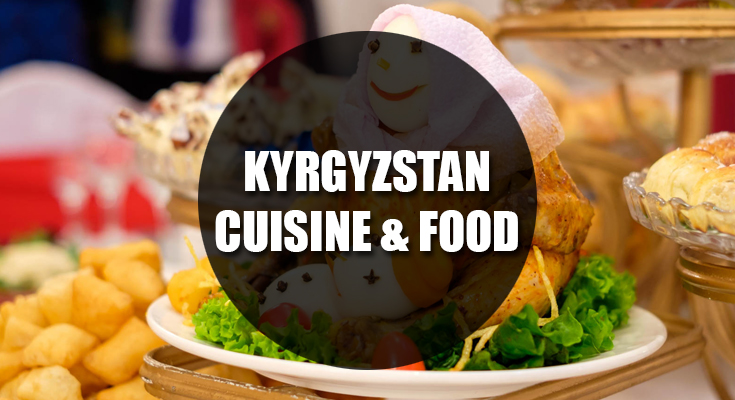 Kyrgyzstan is engaged in breeding livestock which therefore makes meat a substantial part of their traditional meals. Some of the meats you will see in most of the Kyrgyz dishes are mutton, beef and horse served with rice, dumplings, and noodles or alongside potatoes. Many of its cuisine and food resembles that of its neighbouring countries which are hugely influenced by the nomadic way of life. Some of the main cuisine and food of Kyrgyzstan are: 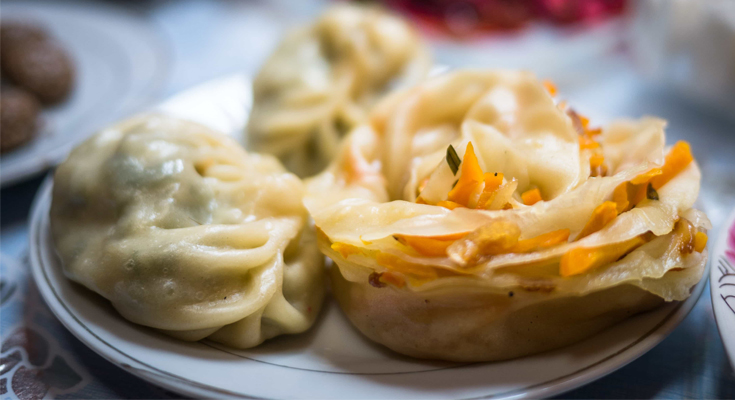 Oromo is an all-time favourite dish of the Kyrgyz which is a traditional steam pie made with fillings of meat, fat and vegetable. It depends upon the person who cooks it, but the filling is usually filled with vegetables such as onion, potato, carrots and pumpkin. 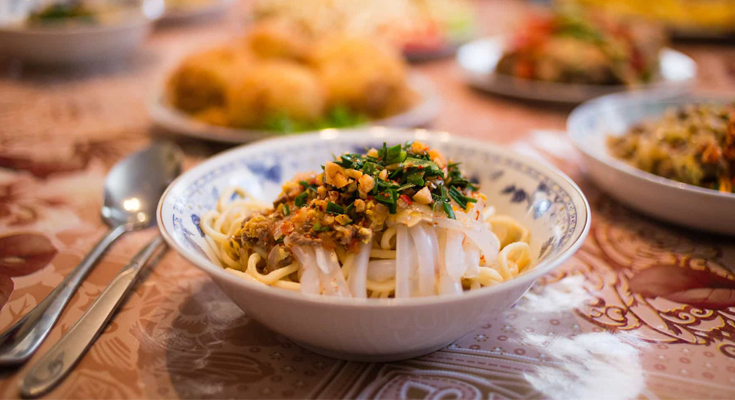 Ashlyan Fu is a dish which is very popular in most of the Stan Countries and you can find it in many restaurants of Uzbekistan as its very popular dish in this part of the country. It is a cold spicy soup made of different vegetables, meat and noodles. 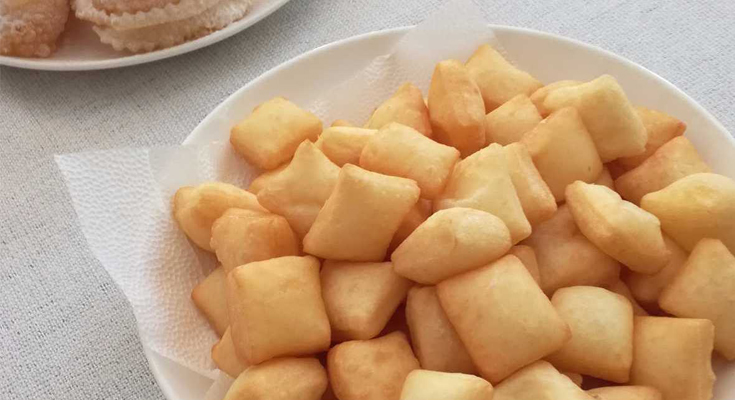 Borsok is a sweet dish which is eaten all over Kyrgyzstan and Central Asia which is similar to a doughnut. It's made of dough cut into small parts and squares and then deep fried in hot oil so that they remain airy and crispy. To savour them, they are best when they are dipped in some fresh cream. 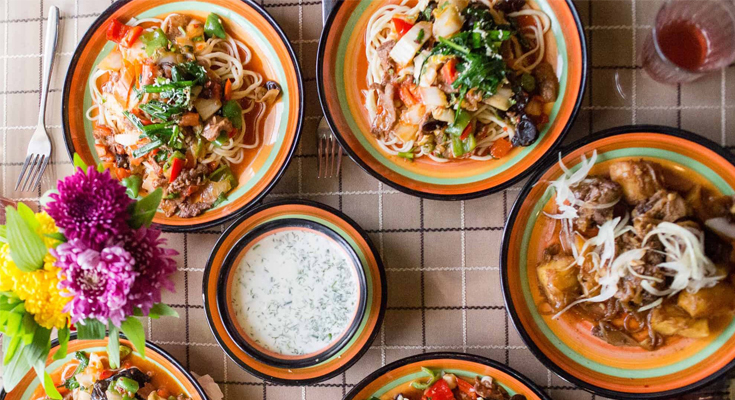 Gulchitai is also a traditional food of Kyrgyz which is made with similar ingredients to that of Beshbarmak. The process of making them is different and prepared with handmade noodles with chunks of meat, vegetables and smothered with some meat broth. 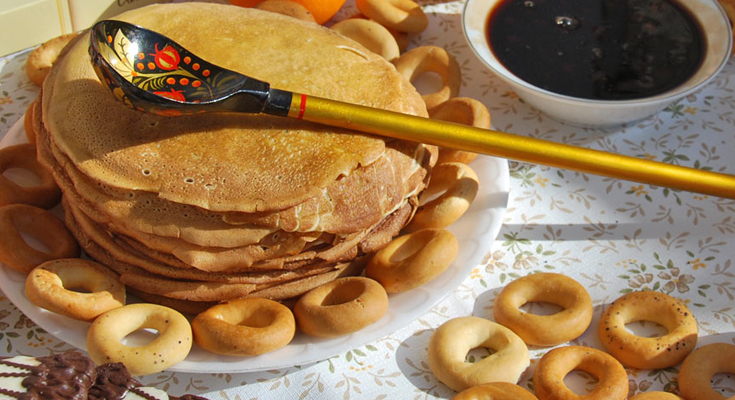 Blini are a Russian and Ukrainian pancake which is very famous in Kyrgyzstan. It is rolled and served with cheese, meat or jam. These pancakes can be made sweet or savour and a portion of very popular snack food in the country. 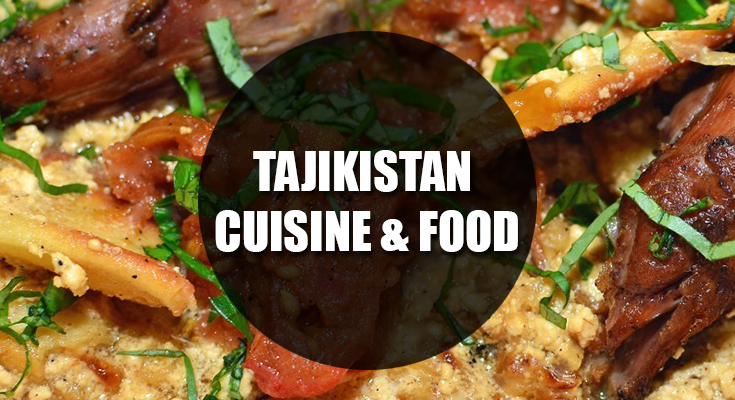 The traditional food of Tajikistan is Tajik cuisine which is similar to Afghan, Russian and Uzbek's cuisines. The national dish of the country is Plov just like many other countries of Central Asia. Another traditional dish of the country is Qurutob which is eaten with hands. Their food is always served with non (flatbread) and it's necessary to be served on their plate. Some of the main food and cuisine of Tajikistan are: 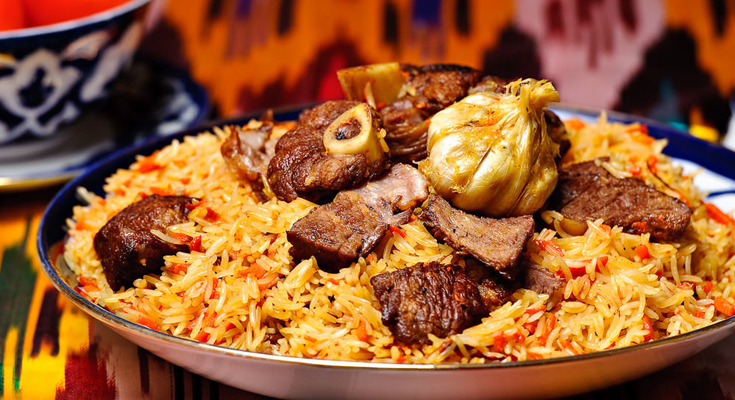 Palov is a national dish of the country which is similar to Iranian biryani. It is a rice based dish which contains beef, roasted garlic, dried fruits and shredded carrot. Though many parts of Tajikistan’s neighbouring countries cook the meal, in Tajik, the Palov has its own flavour and character. 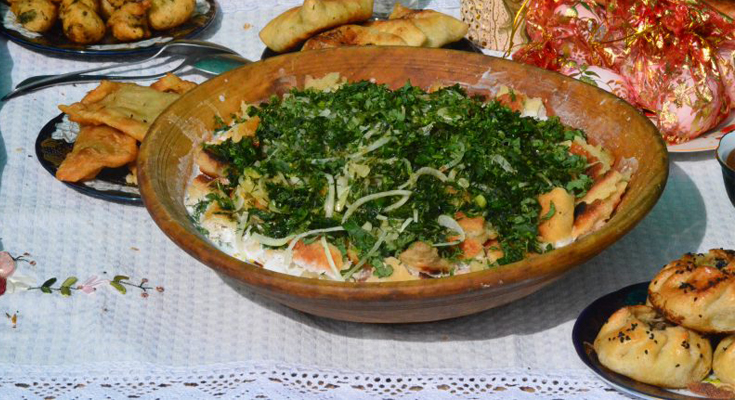 This is another popular meal of the over the nation and it’s made by dissolving the salted cheese in water and then pouring it the non. It’s seasoned with fried onions, melted butter or linseed oil and served with some fresh vegetables such as cucumber, tomatoes and pepper. 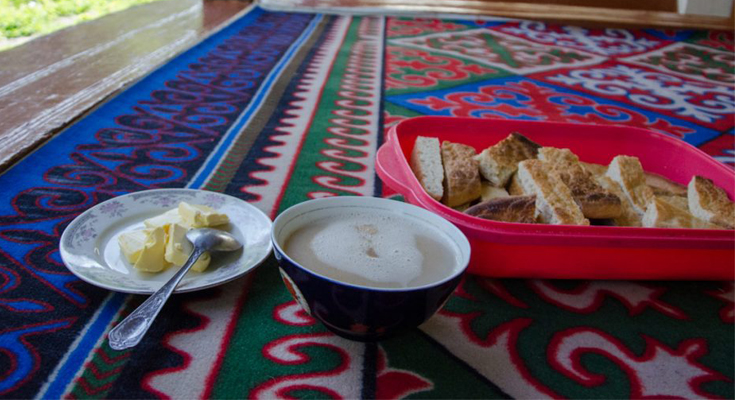 It’s one of the main meals during breakfast time. The beverage consists of water, tea, milk, butter and salt. It’s an easy process to make Shirchoy; the tea is added to hot water with milk and boils it till it cools down with nice flavour liquid. 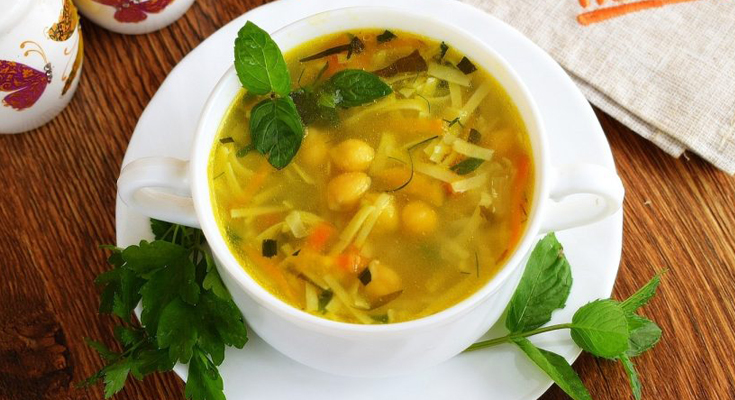 This dish is very popular in the central part of the country and the main ingredient of this meal is mountain onion which is locally known as siyahalaf. It’s a grass like a plant which grows only in the high mountains. It is usually served with rice and yoghurt. 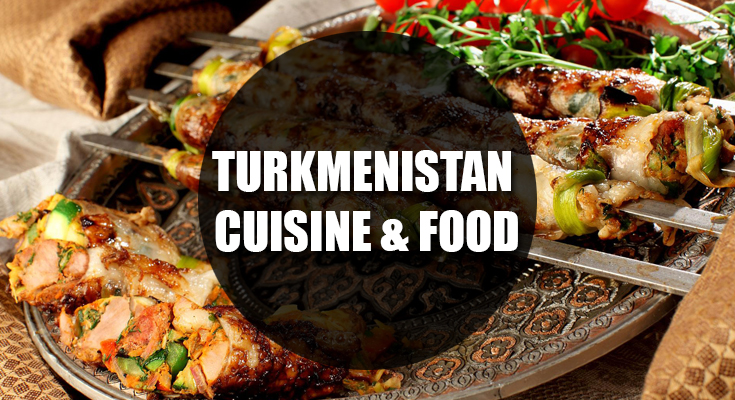 Turkmenistan’s food and cuisine are piled with a high amount of rice, meat, vegetables, milk products, cheese and butter. The Turks love to preserve the original flavours of the ingredients by not leaving aside their herbs and spices to their food. They have quite a similar dish to Turkmenistan, Caspian region and Central Asia. Some of the main Turkmenistan Cuisine & Food are: Shurpa is a popular dish of Turkmenistan and Central Asian soups. It is made from the broth of mutton with an addition of tomatoes and potatoes in it. The vegetables are boiled together and then pan fried with onion, carrots, bay leaves, flour, salt and pepper. It is served in a soup bowl with a bit of sour cream in it. Dogroma chorba is another popular dish that is easy to prepare by boiling mutton or meat lamb with lungs, kidneys and heart. It is then seasoned with few tomatoes, salt and pepper. The meat is cut into small pieces and mix together and cooked in their broth. Before the dish is served, broken flatbread pieces and chopped onions are thrown into the soup. This dish is rare and different as it prepared by shepherds in the deserts. It is a lamb dish marinated in garlic, salt and paprika and it’s placed after onto the hot coals and covered. After about an hour, the lamb turns golden and juicy which is ready to be eaten. The dish takes time, but it’s worth a wait. 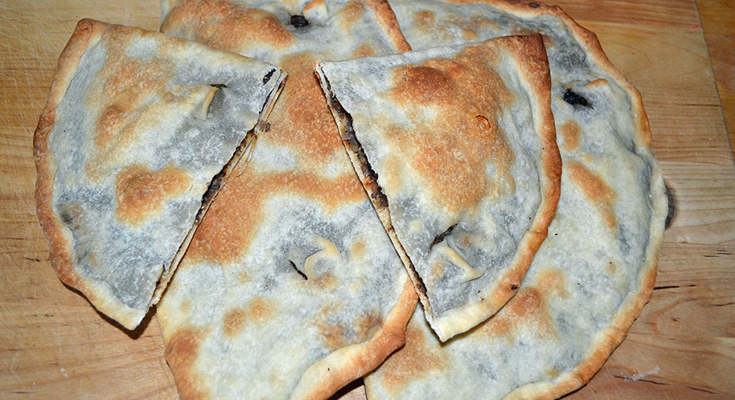 Gutap means half-moon which is a flatbread stuffed with onions, beef or lamb. It is cooked in a pan over the stove. It’s similar to Azerbaijani's qutab and comes in several variants for the stuffing such as potatoes, meat, spinach or pumpkin. The Turks were great nomads and they were well known for preserving meat. Kovurma is a meat dish which is finely chopped into small pieces and fried in its fat. It's considered to be the best dish and it can be eaten hot or cold.