10 Interesting Facts about Azerbaijan That'll Blow You Away!

Azerbaijan is an amazing country. Located on the Caucasus region at the crossroads of Southeastern Europe and Southwest Asia, Azerbaijan is a real blend of east and west. It is an emerging travel destination from this part of the world. Though so far the country has not got its due among foreign tourists, the scenario seems to be changing fast as each passing year number of foreign visitors coming here is increasing. If you also know interesting Azerbaijan facts you may also wish to visit this place soon. We are bringing you 10 interesting facts about Azerbaijan here which may tempt you to on an Azerbaijan Tour. 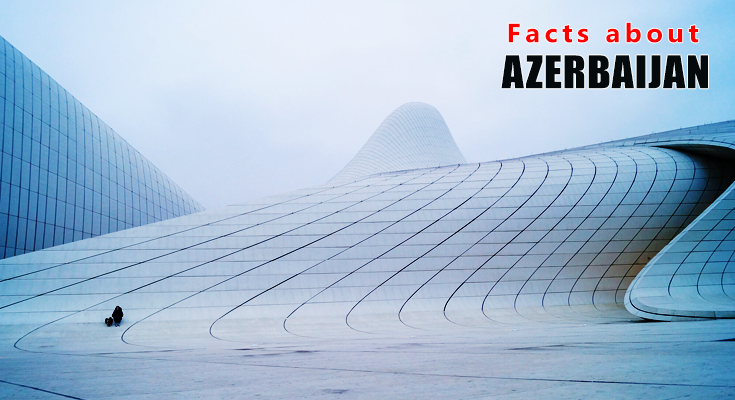 1. Azerbaijan is the Most Secular and Liberal Country in the Caucasus

This is quite a fascinating fact that Azerbaijan was the first Islamic country to declare it a democratic and secular republic that too in as early as 1918. Azerbaijan was the first country to open a theatre, unlike some other Muslim countries where there are still no theatres. From a tourist point of view, it is important. Youth is quite modern, women barely cover their heads. Azerbaijan is quite liberal and you can even find alcohol widely available here.

There has been enough evidence proving that Azerbaijan is super ancient. Archaeologists found tools and remain in some parts of Azerbaijan which date back to 1.5 million years. One can witness this one of the amazing Azerbaijan facts in the Azokh Cave which is known as a habitation site of prehistoric humans. This cave complex of six chambers holds plenty of prehistoric remains, and It houses some of the earliest groups of proto-humans in the Eurasia region.

3. The Capital City is Futuristic with a Perfect Blend of History and Modernity

Baku is truly modern. When counting interesting Baku facts it must be on the top that despite being one of the oldest cities in the region, the modern infrastructure that includes famous ‘Flame Towers’ is truly world-class. Baku is full of surprises for every visitor. Right from the ultramodern Baku Airport to the city center where you find a wonderfully historic old town on the streets of Baku along with the historical place like the Palace of the Shirvanshahs, the capital city is truly an attraction. Baku’s outlandish architecture is worth seeing in places like the curvaceous Heydar Aliyev Center, the mirror-like SOCAR Tower; and the Flame Tower skyscrapers.

4. You can Feel the Romance in Baku as well

There is a small place called Little Venice in Baku which was built in 1960. Little Venice is possibly the most romantic place in Baku city. This is a man-made waterway that was made back in 60s flows between shops, restaurants and entertainment venues. There are bridges and walkways which connect some islands. There are two beautiful restaurants out of which one offers Western cuisine and the other one offers Eastern cuisine. You must enjoy the boat ride here.

This is also one of the interesting facts about Azerbaijan. Azerbaijan is cheaper than in many European countries. Transportation is quite cheap in the country. Food is also very cheap in Azerbaijan at local eateries. Accommodation in hotels beyond fancy places in Baku is also very economical. Does it not make Azerbaijan an interesting travel destination?

6. Tea is an Essential Part of Social Life in Azerbaijan

This is yet another and one of the amazing Azerbaijan facts. Everyone drinks tea in Azerbaijan. Tea is the most popular drink here. It has been part of the culture of the country. In every social occasion, tea is served. It is served with myriad trimmings. Tea is consumed through the jam and flavored with lemon, thyme, mint or rosewater. You must drink tea at local tea houses in Baku and other parts of Azerbaijan.

When you plan to go to Baku, one of the Baku facts you enquire about is how are the people there? Well, if you have this question in mind, you can rest assured of it. This is the thing you look for when you travel to a new place. Azerbaijanis are the nicest people in the entire Caucasus region. The locals here invite you to their place and take you out for lunch. This might not be true for everyone in Azerbaijan but the majority are welcoming people. Most of them don’t speak the English language still they try to help you out.

Azerbaijan land is super rich with oil and gas and that ignites the fire from the mountains also known as the ‘Fire Mountains’. The fire erupting because of huge gas deposits burns until the gas runs out. Fire Mountain or ‘Yanardag’ blazes continuously with a natural flame. This is not just a geographical phenomenon but also a must-see thing near Baku in Azerbaijan.

9. Azerbaijan has a Great Landscape

A country small in size, Azerbaijan has 9 time zones out of 11. You can find everything in Azerbaijan. High altitude Caucasus Mountain, vast hot deserts, green meadows and long coastal area all is contained by Azerbaijan. You have an urban landscape in Baku and also 50% of the mud volcano in the world is in Azerbaijan only.

10. Azerbaijan has a Huge Influence of Soviet Times

One of the interesting facts about Azerbaijan and other neighboring countries is that they have lots of Soviet time influences still visible and Azerbaijan is no exception. Even when it comes to language Russian is spoken widely in Azerbaijan. Sharing the borders on the north by Russia, Azerbaijan was incorporated into the Soviet Union after 1920 and got its independence only in 1991. You can still see buildings such as Heyder Aliyev Palace which was known as Lenin Palace during the Soviet era and others of the Russian Imperial era in the capital city Baku.

Now you have some amazing Azerbaijan Facts on your hand to excite you enough to visit Azerbaijan as you have plenty of reasons to go and explore the country. You can buy an Azerbaijan Tour Package and enjoy a great trip to the great Caucasus travel destination.