Best Things to Do in Ashgabat, Turkmenistan

Turkmenistan is the country where the past infuses so well in perfect harmony with the present. Though the country is historically interconnected with its neighbouring countries, it stands out from the rest of them. The country is densely populated and inhospitable to plant and animal life. Many of its cities were the main point of the Silk Road Trade linking worlds together. There are three World heritage sites in the country namely the Nisa, Merv and Konye-Urgench. The country has been a very popular destination, especially for its architectural and agricultural sites. 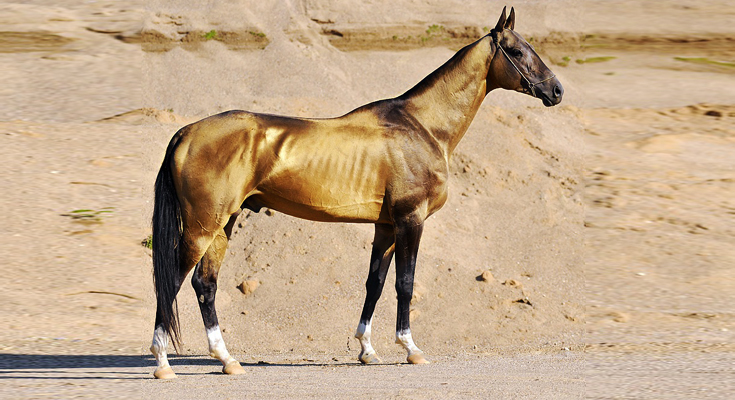 The Akhalteke horses are a real pride to the Turkmen as they are famous all over the world. These horses are no ordinary horses; they are well maintained and gifted to queens and presidents of the world. They play a major role in the export of the country. These horses have always been war horses and they are perfect for falconry riding as they ride as fast as a bird and take over a falcon.

2. Explore the Dinosaur Fossil and Tracks 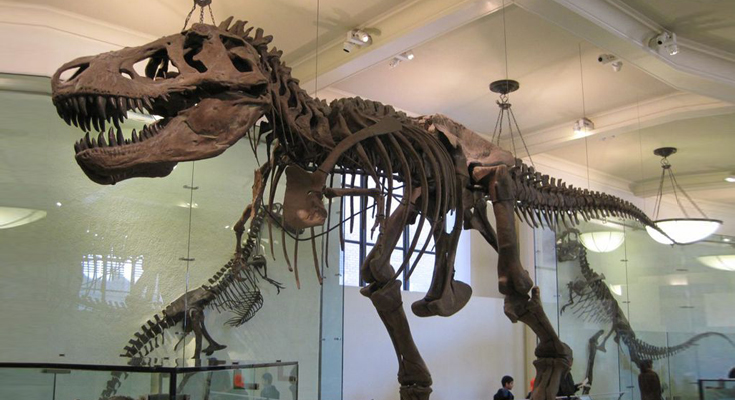 The Dinosaur plateau has gained worldwide fame for the footprints of the dinosaur on a large limestone slab. These large tracks of the three dinosaurs are in the western slope of Kugitan range. This range is not only the reserve for the dinosaur tracks but also has the longest fossils paths stretched few kilometres. So if you are looking for things to do in Turkmenistan, experience this historic event which you will never find in any part of the world.

3. Visit the Gates of Hell In the hot Karakum desert, there’s a 230 ft wide crater that has been burning on fire for almost 40 years up to date. The crater is technically called the Darvaza gas crater, but locals’ call it “Gates of Hell” Its fiery glow can be seen from miles away. It was created in 1971 by the Soviets when they accidentally drill rig the natural gas cavern which causes the entire rig to fall and poisonous fumes have been leaking out. Travellers travel far to this desert to see this site, and if thinking of something crazy of what to do in Turkmenistan, see the Gates of Hell. 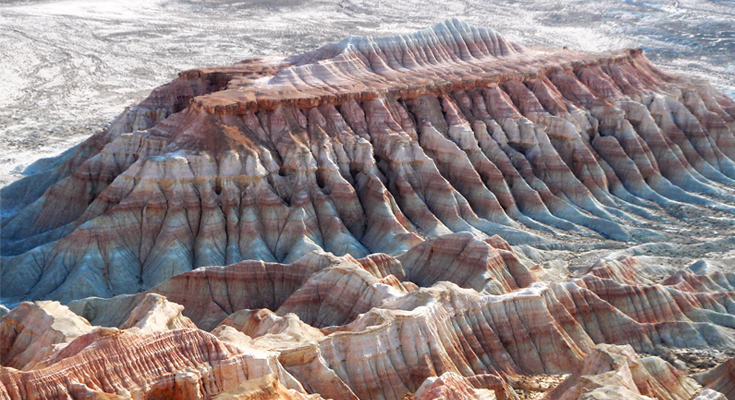 The Yangykala Canyon is a natural wonder very few people have heard about and maybe even seen. Its vast landscape with pink, red and yellow rock wall of 60-100 meters created about 5.5 million years ago. If you are in Turkmenistan, you should not miss out on visiting this site as it’s so intriguing. Once upon a time, this site was an old sea, and it’s sad that it’s dried up but it leaves beautifully cut rocks. In a land covered with deserts, finding a place to swim can be quite a challenge. Luckily, there’s an underground lake to steam off the heat. In the Barkharden Cave, there’s a long metal staircase which leads down to the long lake where the waters are warm with high amounts of salt and minerals. The cave has a very strong distinct smell from Sulphur. Still have a thought of what to do in Turkmenistan? Experience the Underground Lake. There’s an ancient ruin which used to be a settlement for the Iranian peoples in Ashgabat, Turkmenistan called the Old Nisa. The fortress was included in the World Heritage Site by UNESCO. It was ruled by the Parthian Empire, a complex fortress with 43 rectangular towers. Its architecture is beautifully absorbed with the traditions of the Roman Empire and of Ellada.

7. Go and Observe a Revived City There are no cities that were wiped off from the map and revived again, but Ashgabat, the Capital of Turkmenistan rose from its ashes and stands out strong today. In the year 1948, it was awfully destroyed by an earthquake and took the lives of about 10,000 people. It was a very horrific time and people of Ashgabat remembers the date till today, and thus erected expressive monument as a modern city with modern cities, fountains, shopping places, business centres etc.

8. Catch a Glimpse of Cemetery Adorned with Goat Horns 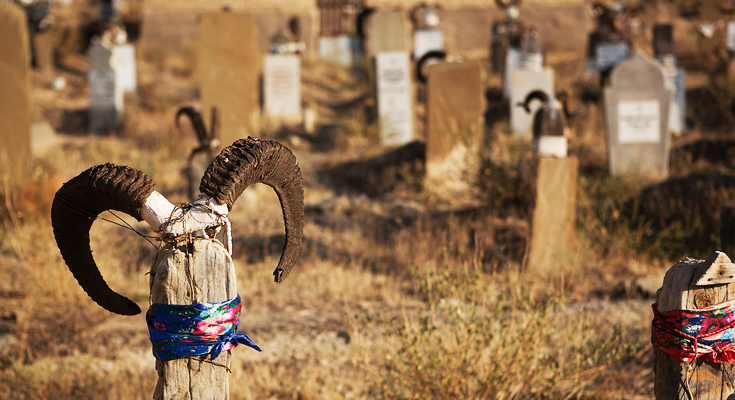 There’s a cemetery in the village of Nokhur where every grave is marked with a horn of a mountain goat. It’s believed that the goat horns keep the evil spirit off the souls of the deceased so that they can go safely to heaven. The people of this region have always considered the goats to be a sacred animal for their endurance and strength. 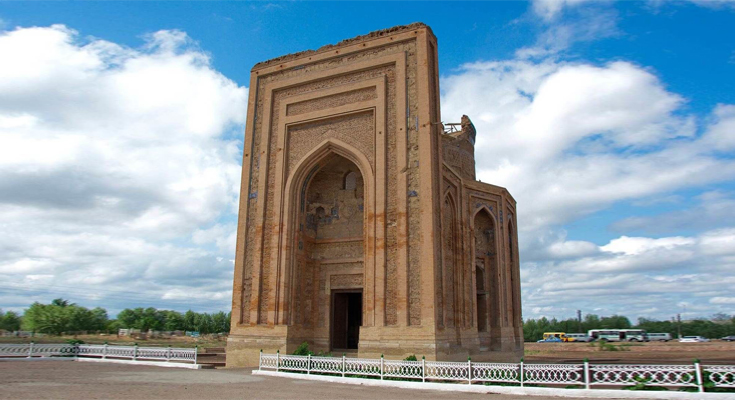 For many centuries, the ancient capital of Northern Khorezm has been a flourishing state with great buildings everywhere. There was a great cultural and medieval centre for the famous Academy of Sultan Mamun ibn-Mamun. Many great scientists and other significant thinkers of that time lived and worked in this ancient city. The monuments are a symbol of achievements in craftsmanship and architecture whose influence, later on, reaches Iran and Afghanistan. Merv was once the biggest city, the Silk Road metropolis of Merv never fully recovered after the city’s destruction by Genghis Khan and his son. Lord Curzon, the Viceroy of India at that time called its world’s greatest vanquished cities. Throughout history, Merv had gone through many up and downs which now turn out to have an interesting history to the city. It was the Parthian Empire centre and then conquered by Arab and many others in the line. There are many archaeological findings discovered in this city.

Best Things to Do in Ashgabat 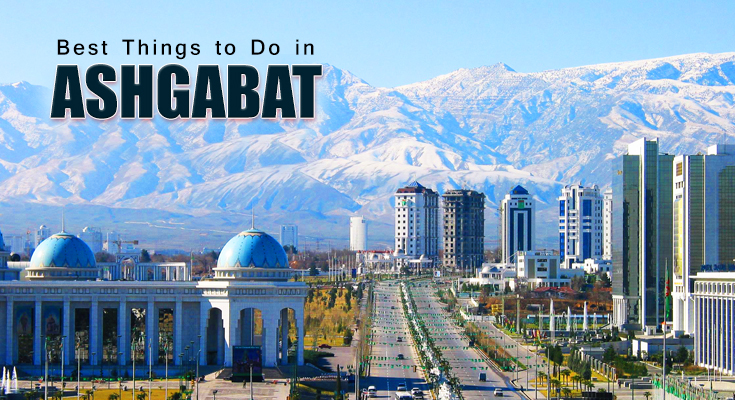 Ashgabat is the capital city of Turkmenistan in Central Asia located between the Kopet Dag mountain range and the Karakum Desert. The city uses to be known as the “Garden City”, but after they gained independence from the Soviet Union in 1991, the city completely changes and it’s titled for most white marble on Earth. Ashgabat was founded in 1881 and named after a nearby settlement of Askhabad. When the city was under Russian rule, the community of Baha’i increased and completed the first Baha’i House of Worship. After independence from the Soviet in 1991, the city rise with residential buildings, residential towers and many of them were made in white marble. The city has much to offer and there are many things to do in Ashgabat such as visiting a huge monument to a bizarre book, get married in the White Marble City of Ashgabat and many more.

What to Do in Ashgabat? 1. Try the Walk of Health If you are thinking of what to do in Ashgabat, try the harsh mountain walk path. The city is probably one of the weirdest city in the world as it was ruled by a totalitarian president Saparmurat Niyazov who actually made very obscure laws such as the ban on dogs lip-sync in concerts, circus. In the last 15 years of his reign, he’s built bizarre architectural monuments and the Walk of Health is a strange creation of Niyazov. The site is a concrete stairway built and aimed to improve the health condition of the citizens.

2. See Nothing like before: A Huge Monument to a Bizarre Book 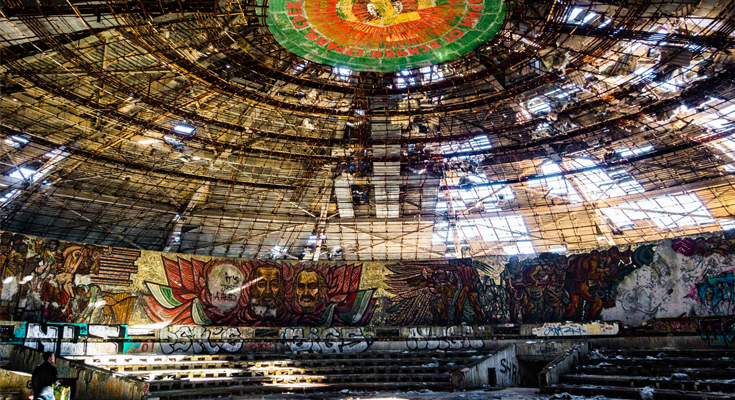 Everyone knows about the president’s strange laws, from banning smelly dogs to lip-sync concerts, but few people knew of him being a published writer for a bizarre work known as “the Ruhnama.” He wrote the book in 2001 as a spiritual guide for the country and also as a manifestation of the personality cult. It’s made into a Giant Ruhnama, which is now one of the bizarre monuments on Earth. Visiting this site is one of the best things to do in Ashgabat while you are in the city.

3. Get Married at The Wedding Palace 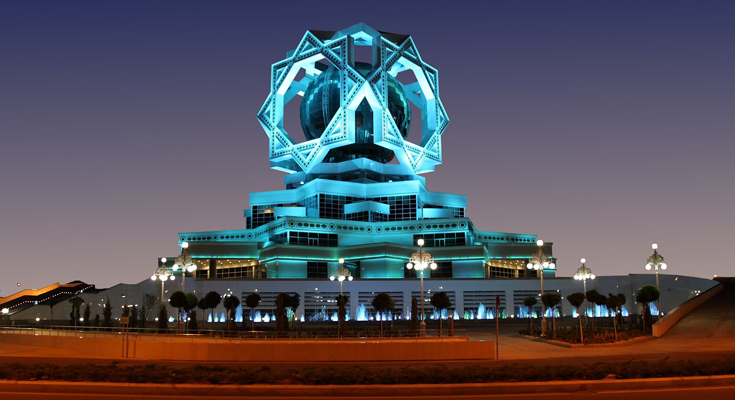 Turkmenistan has some of the most bizarre architecture and puzzling statues in the world. One of the most famous amongst them is the Wedding Palace. It was built in 2011 and it’s a civil building which has a big geometrical shape disco ball globe on the top. The lower part is made with star-shaped white and gold structure. And, inside, the building, the newlywed can register their marriage legally.

4. Visit the Turkmen Version of Disneyland The Disneyland is named after the former dictator of Turkmenistan, Saparmurat Niyazov who spends years ruling the country with an iron fist. He ordered the bulldozing of many homes of many residents of the capital city. It was opened in the year 2006 and has 54 attractions such as log ride, a Ferris wheel, small roller coaster and decorations of animal scenes throughout the park. The ruler died shortly after the park was open, so if you want to see the weird idea of Niyazov, include this place as on your list of things to do in Ashgabat.

5. Drop by the Independence Monument of Turkmenistan This is one of the largest and most extravagant monuments, and it’s one of a kind in the world. The monument is in the middle of the park with numerous pools and fountains. There are about 27 comically looking standing statues that surround the entire place. The tower is highly decorated with gold within a dome below it. If you looking for things to do in Ashgabat, why don’t you visit the dictator’s golden statue? It’s well known about the Dictator Saparmurat Niyazov’s laws of dislike, one of them being the dislike for gold teeth, but he happily adored a gold statue of himself. It’s a rocket shape tower which is 75 metres in height with a golden statue of Niyazov.

7. Shop and Stop by Tolkuchka Bazaar This is one of Central Asia’s best sights, and you will see a collection of building in hanger-style and surroundings. The market was relocated to another location in 2010. The new market now officially known as the Altyn Asyr Market is a completely new market with many of the best things to shop while you are in Ashgabat. 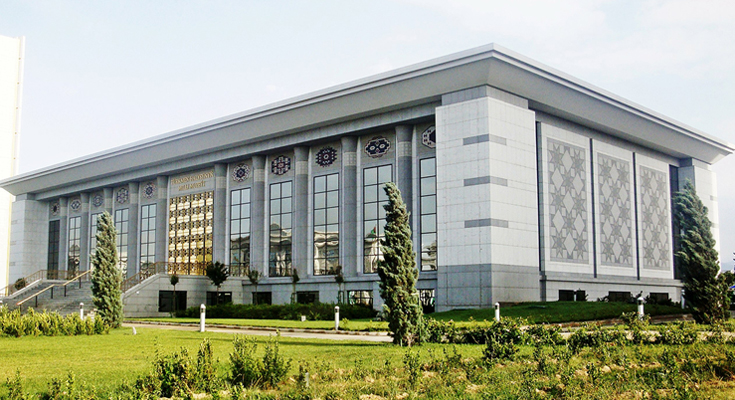 The Turks are well known for their hand-woven carpets in the world. They craft the best of the carpets in the world, and it’s fascinating how they even have their own carpet museum. In this museum, you will find an unlimited number of rugs and it exhibits the world’s largest hand-woven rug where you can see them hanging with beautiful designs all over the world. 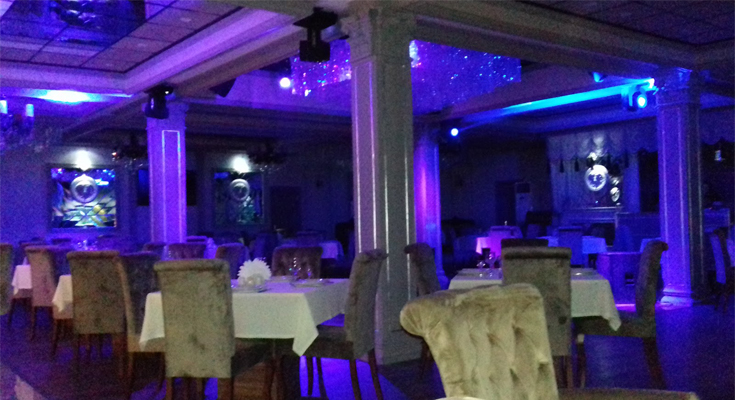 The place may not seem too good with its decor, but it’s the one place you would want to eat while looking for what to do in Ashgabat. The dishes here have an international touch with a strong emphasis on Italian cuisine which includes steaks, cay fish, squid and many others. It’s a bit high for the price but offers the best food and wine.

10. Feel the Artistic Vibes at the Museum of Fine Arts 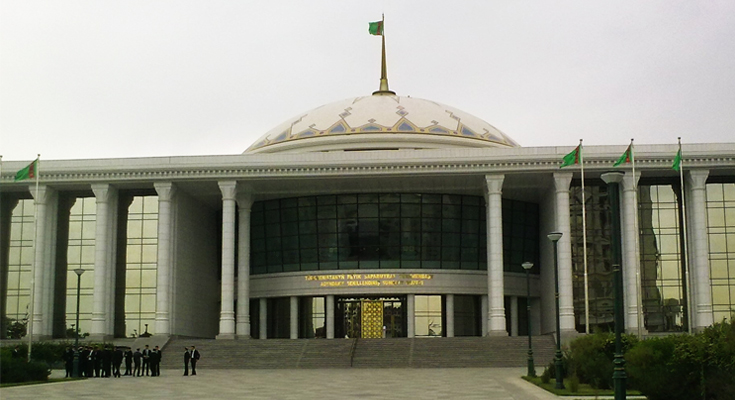 The Museum of Fine Arts is a museum in Ashgabat which was founded in 1927. It’s an impressive building with two-tiers and lot of gold adorned around. The museum has more than 6000 collection of artwork which includes sculptures, paintings and graphic works by Turkmen, Russian and other foreign artists.