Golden Gate of Kiev - An Attraction You Should Not Miss

Ukraine is an emerging tourist destination. Located at the crossroads between Central and Eastern Europe Ukraine is still largely unspoiled by the foreign visitors. There are plenty of tourist attractions in Ukraine. You can explore the overwhelming Carpathian Mountain. Adventure lovers can dive into skiing, hiking, fishing, and hunting here. If you are silent nature lovers type bird spotting in Danube Delta will be a good choice. Outdoor lovers can go for Cycling along the Dnipro in Kiev and the water sports on the islands across the river. Ukraine is also a great summer destination as there are cool beaches along the coast of the Black Sea. And there are UNESCO World Heritage sites as well.

Talking about the most popular tourist destinations in Ukraine, Kiev the capital city of Ukraine comes on top. Anyone who has visited Kiev can vouch for Kiev’s Attractions. Kiev is the cultural center of Eastern Europe. Kiev is famous for many sites such as churches with golden domes and historical monuments. However, in this blog, we will explore the Golden Gate of Kiev or Zoloti Vorota. This is a popular travel site in Kiev. Let us see why and more. 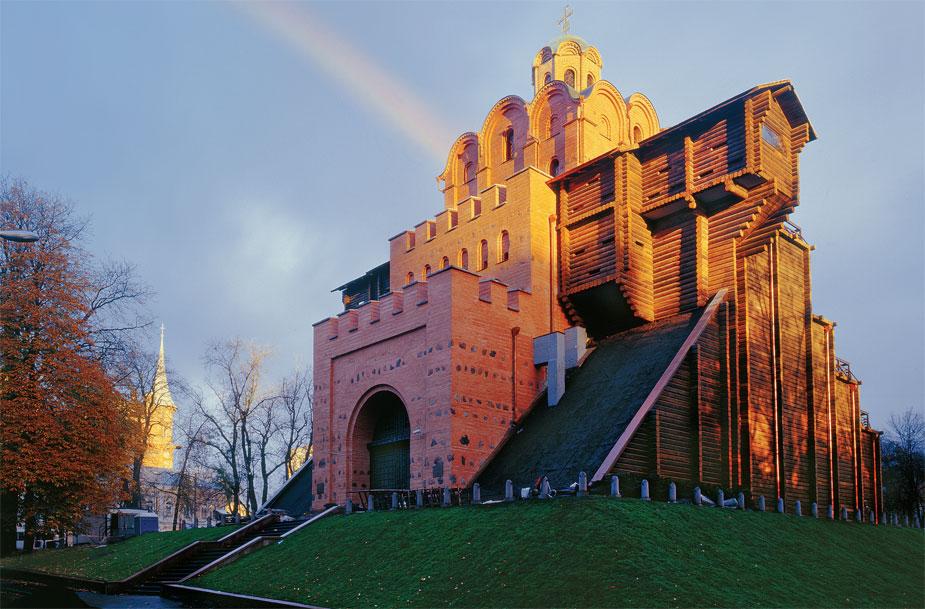 In the 11th century, Kiev was the capital of Kievan Rus’. In the process of Kiev’s fortification in the early part of the 11th century, Golden Gate of Kiev was constructed as the main gate of Kiev. The Golden Gate stood as a magnificent central entrance to the capital city. However, Golden Gate did not remain in its original form for long. This was dismantled during the late stages of the middle ages. After that, only a few vestiges of the gate remained. After lots of objections, the gate was fully rebuilt in 1982 when Kiev marked the 1500th anniversary of its creation.

No image of the original gate is available. Despite that, the architecture of the Golden Gate of Kiev is said to be one of the finest examples of fortification architecture not just in Ukraine but in entire Europe. This is one reason why the Golden Gate is a popular Kiev’s Sightseeing place.

Golden Gate is surely one of the most popular attractions in Kiev. However, this may not be enough for you to get excited to visit this place. So, why not look at the below interesting points about the Golden Gate of Ukraine.

1. This is a Historical Site

History lovers have all the good reasons to visit this historical gate. You can go and see this tall and beautiful gate in Kiev. In the early days to protect cities from outside invasions building giant was a norm. This gate was also constructed with the same purpose in the early 11th century to protect the city from invasion by the nomadic tribe. Unfortunately the gate was dismantled unfortunately in the late middle ages. The gate acted as the main entrance gate of the Kiev city and this was reconstructed in 1982. Go and see this historic gate to explore the history deeper than presented here.

2. The Rebuilt Gate Keeps Elements of the Original Gate

Golden Gate was damaged during the Mongol onslaught in 1240 and later on by others. All efforts to repair the gate failed and then in the 18th century the gate was covered with earth. After that, for almost half a century no one could see the gate. It was only in the 1832 excavation exercise when ruins of the gate were discovered. After that attempt to rebuild the gate started. Lots of objections against building the gate completely new as opposed to keeping the original piece were raised. Finally, the gate was reconstructed in 1982. The newly built gate is also quite beautiful and contains the walls and sections of the arch of the original gate. Stones and brick remnants of the original gate were used. 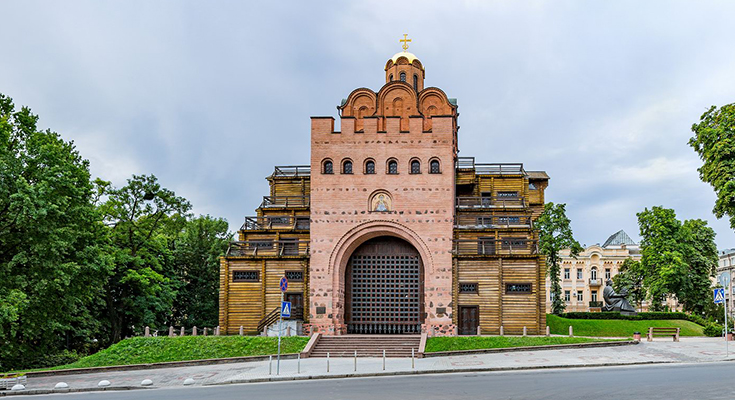 3. Remains of Golden Gate are Still There

Oh, I would not get to see the original gate. If this thought is crossing your mind then you are partially wrong. Yes, you would not be able to see full of the original Golden Gate, but you can surely see the remains of the Golden Gate of Kiev that still stand in a small park located at the corner of Volodymyrska and Velyka Pidvalna streets. If you are a curious one, go and see the ruins. They also tell you a lot about the original gate.

4. The New Structure is cool as well

A new pavilion was built in 1970 over the ruins. This was created to keep the original look intact and at the same time to protect the remains of the original. This pavilion was rebuilt in 1982. There are a tourist information center and a small museum inside this pavilion. You can also enjoy a great view of the city from the top of the pavilion. There is a bronze monument to Yaroslav the Wise right in front of the Golden Gate. Another statue of a cat called Pantyusha is also attractive. People love to take pictures and selfies here.

6. The Gate is Easily Accessible

Sometimes you avoid making an extra effort to visit a place. However, that is not the case with the Golden Gate. There is a nearby Zoloto Vorota metro station on the Green line of Kiev metro to this gate. The metro station takes its name from the name of the gate itself. The gate is located in Yaroslav Val Street that stretches from the Golden Gate to the Lviv Square. You can walk this street to have a good time as well.

7. There are Food Joints Nearby 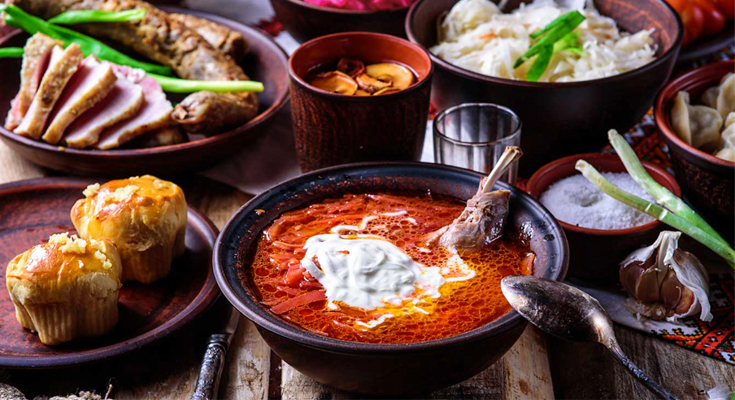 No place can be attractive enough without food joints around it. Before and after exploring the Golden Gate you want to have some food. Don’t worry as there are many food joints to eat and drink nearby the Golden Gate. The most popular one is Golden Gate Irish Pub. You can enjoy breakfast and lunch here and beer lovers can taste special beers on the offering. You can also enjoy games like dart, billiard, watch sports on a big TV screen and live music here.

8. There are other Attractions near the Golden Gate worth Exploring

Golden Gate is located in the center of the city. This makes it all more worth visiting because you can go to any other place from here quite easily. You know a nearby metro station as well now. So we are naming a few popular tourist sites in Kiev which you can go and visit once you are done at the Golden Gate. These places include names like Baron Shteingel’s Castle, National Academy of Sciences of Ukraine, House of Baron Steingel’s Refuge, Taras Shevchenko Monument, National Opera House of Ukraine, Saint Sophia Cathedral, Elephant Spa and Panikovski Monument.

You can add more reasons to visit the Golden Gate of Kiev. As every individual is fascinated by the different aspects of a tourist place, you can choose your one good reason to visit this place. Kiev is anyway beautiful. Once you are there you can explore as much as possible. Keeping the Golden Gate in your list of must-see places in Kiev will not disappoint you at all after you actually spend some time here.