Russia is an amazing country full of history and cultural significance on the global map. Those who are not aware of Russian culture facts will be amazed to know that there are more than 150 ethnic groups in Russia and family is given high value in the Russian culture. Russia is a large country in terms of the area stretching into two continents. It has a vivid history that is clearly visible in several parts of the country. So, those searching for facts about Russia will come across many interesting facts about Russia which will surprise them. We are bringing you 20 Interesting facts about Russian Culture here. 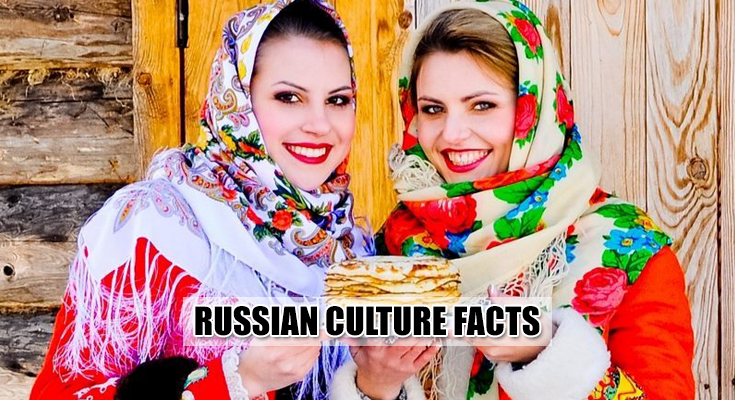 1. Russia has plenty of Cultural Symbols

The national symbols of Russia such as National Flag, National Anthem Two-headed eagles, Matryoshka, etc. are a part of the Russian culture heritage that contributed to the national identity of Russia. Official symbols are only 3 the national flag, emblem and the anthem but there are several unofficial but popular symbols representing Russian culture as well. The two-headed eagle came in the 15th century. One head represents the European part of Russia and another head represents the Asian part of Russia.

Family is given high value in Russian culture. Parents, grandparents, and kids all are closely related and depend on each other. Grandparents even in nuclear families play a huge role in raising children in the family. Relatives also have very close relationships and are interdependent. Extended family members are also very involved. They all stand for each other when needed. Helping family and extended family members in need is considered to be the obligation.

3. Art and Craft is an Integral Part of the Culture

Several cultures have preserved their art and craft traditions. Russia has done the same too. Some of the handcrafted souvenirs made in Russia are quite popular. Generations have kept the art of making wonderful and unique items alive. Do you know this one of the interesting facts about Russia that Russian Dolls, finely decorated lacquer boxes and other items of regional folk crafts make special souvenirs not just for locals but for the foreign visitors as well.

4. Matryoshka is the Most Popular Russian Souvenir

Matryoshka is popularly known as ‘Russian Dolls’. It came about 100 years ago. Earlier themes were mainly drawn from fairy tale characters but since the late 20th century they have embraced a larger range which includes soviet leaders. The word ‘Matryoshka’ came from the Russian word for ‘Mother’ and thus these nesting dolls are a symbol of motherhood. This set of dolls where one is the largest wooden mother doll with subsequent baby dolls are great a great souvenir as well.

5. Superstitions are still Part of the Culture

Looking for deep-rooted Russian culture facts? Well, the breaking of a mirror is bad luck in Russia. That means Russia too has a culture of superstitions like any other country on the planet. Superstitions have existed in Russia and many of them have become inseparable parts of daily life. Some superstitions are practiced by the mass population while others are followed regionally. One such tradition in Russia is that no one should give birthday wishes to someone before their birthday. Birthday wishes and celebrations can happen only on or after the birthday.

Russians love to make weddings into big events. Traditional Russian weddings may last between 2 to 7 days. On the first day of the wedding, the ring exchange takes place. The celebration is full of dancing and singing. Groom also has to pay a ransom for his bride when he arrives at the bride’s home. This is treated as a comical and entertaining event.

7. Don’t say No to Food and Don’t Come Empty-Handed To A Party or Event

This is one of the interesting facts about Russia related to hosting culture. If you have been invited by somebody in Russia, you should not say no to the food offered by the host. You should respectfully accept the food offered because refusal to food is considered offensive. Also, you must bring something as a gift for the host because coming without anything is considered bad here.

8. Short Story and Dialogues are A Common Form of Humor

Humor is part of all cultures in the world. However, what is perceived humorous can vary from one place to another. In Russia, short fictional stories and dialogues with a punch line are common forms of creating humor. Humor is used as an ‘antidepressant’ by Russian people.

9. Russian Literature has been Among the Most Influential and Developed

Literature is one of the core parts of Russian culture and one of the prominent facts about Russia. Russia has had a culture of producing some of the best literary works in the world. Literature lovers would know the great work done by Pushkin who wrote some of the best romantic poems and Leo Tolstoy who is regarded as one of the best authors of all time. His famous novel ‘War and Peace’ is recognized as the central work of world literature.

This is known to all when talking about Russian culture facts. Vodka drinking is a part of Russian culture. Data also suggests that Russia is on top in terms of alcohol consumption in the world. Russians don’t drink without a reason and they have a particular way to drink Vodka and other drinks here. Champagne, cognac, beer, and wine are also popular in Russian culture.

11. Beer was not Considered an Alcoholic Drink until Recently

It is said that an average Russian consumes 18 liters of alcohol every year. Any drink that contained less than 10% of alcohol in Russia was considered as foodstuff. So, it was freely available everywhere. Beer consumption rose among the Russians. But in 2013, beer was brought under the list of alcoholic drinks to control the abuse of alcohol in Russia.

12. Tea is as Strong as Vodka in Russia

This is true. Russians love Vodka and tea both. They are avid tea drinkers. Tea is a part of the culture. Black tea has been the most common tea in Russia traditionally but now green tea is also becoming quite popular. Tea is generally not served alone. Jam, syrup, cakes cookies and other sweets accompany tea.

Bandy is a sport that is also called as the elder brother of hockey. This is essentially ice hockey with a ball that has been a part of Russian's life since the 10th century and by the 18th century, people in most of the villages in Russia had started playing Bandy. Today, Bandy happens to be one of the main sports in the Olympics as well, thanks to Russia which played a huge role in the development of the game.

14. Ballet is the Gift of Russia to the World

When one would talk about Russia culture facts, ballet would always come up in the list. Ballet may have first come to Italy and France, but the whole world knows that it has been refined and invigorated in Russia. Even today ballet theaters in Russia such as Bolshoi in Moscow are world-famous for best ballet performances.

16. Cats have Jobs in St. Petersburg

Does it sound cool? Well, this is true though. 70 cats guard the treasure of Russia’s greatest museum The Hermitage in St. Petersburg against rodents. The tradition started in 1745 by Empress Elizabeth, the daughter of the founder of St. Petersburg, Peter the Great and it continues.

17. Subbotnik (Staurday) is the Day of Volunteering Labor

Subbotnik is the word used for ‘Saturday’ and Voskresnik is the word used for ‘Sunday’ in Russia. These were the days of unpaid volunteering work following the October revolution. So, on weekends people used to volunteer for the society. Subbotnic or on Saturday Russians used to clean the street garbage, fix public amenities, collect recyclable material and do other community services. The tradition has continued in Russia.

When you are talking about interesting facts about Russia, something about food has to be there in the list. So, chicken’s foot soup or called Kholodets in Russia is a delicious traditional Russian dish and the dish came here quite early when people were looking to preserve meat. It takes more than 7 hours to cook and it is one of the signature starters in Russia.

19. An Odd Number of Flowers for Happy Occasions

If you are planning to visit Russia and looking to find facts about Russia, you will surely love to know this that Russians are great hosts and they love to accept guests. They don’t need a special occasion to visit friends or neighbors; they simply love to meet over dinner or just simply catch up to have a chit chat about what is going on in life.