Shymkent is one of the biggest and third largest cities in Kazakhstan. It is located in Southern Kazakhstan. The vibrant city is bustled with bazaars and vivacious downtown. In 2011, it was voted as one of the “Best Capitals in CIS”. Its leafy street buzzes more than anywhere else in the country relatively located close to the borders with Kyrgyzstan and Uzbekistan. Until the year 1993, the city was known as Chimkent. At the beginning of the 12th century, it was conquered by Genghis Khan and developed as a significant and agricultural centre and therefore constantly a subject to invasions. The Mongols razed through the Silk Road stop over here and when Russia took over the country, it was rebuilt again. Today, it is a flourishing trade centre that refines oil and brews of the country. Shymkent City is slightly brash and modern with a couple of good architectural grandeur, religious and historical sites. The country also has developed ecological tourism and there are some interesting places for mountaineering, fishing and hunting. 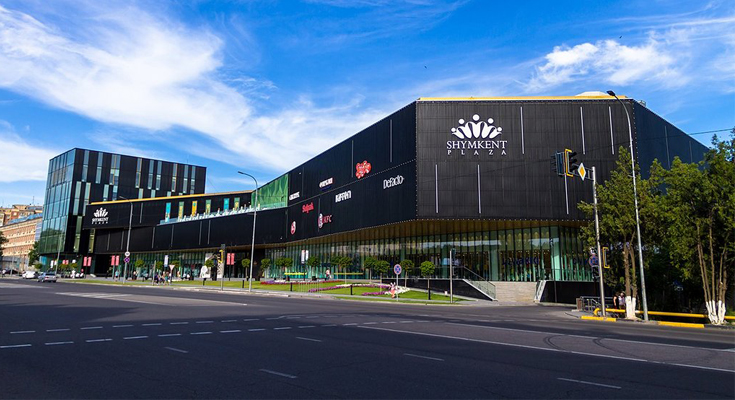 It is one of the largest shopping mall and entertainment centre in the city created on an international level for a comfortable time and shopping. Located right at the heart of the city, it is surrounded by magnificent places such as the Regional Drama Theatre and Al-Farabi Square. It is visited by ten to fifteen thousand people every day on the weekdays, and the number increases in the weekend. 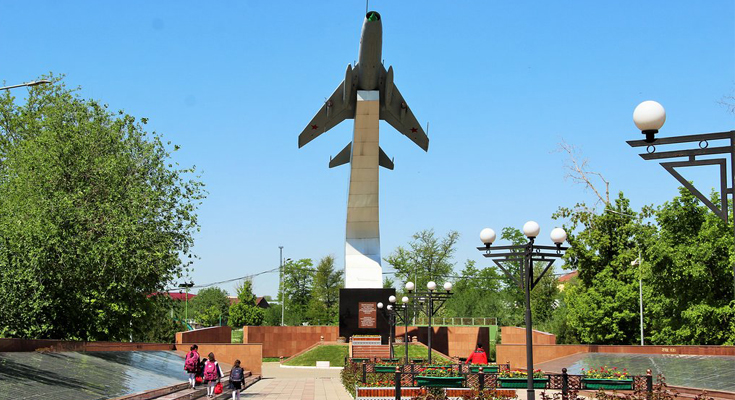 The park is in the central part of the city and it's great for time for exploration. You will find a big memorial for war dedicated to the Soviet pilot who gave up their life during WWII which is very impressive. It offers a peaceful and quiet zone in spite of being in the city and well kept green and clean. Within the park, you will also find a nice clean environment to relax and space for walking, running etc with cafes and food shops. 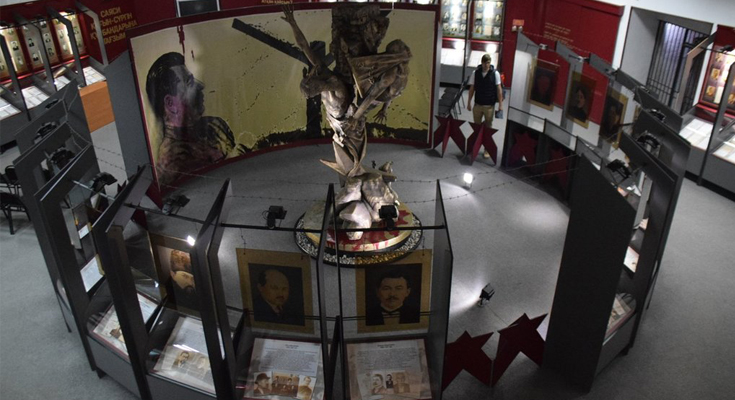 The museum was built in dedication to the victims of the Soviet political oppression. It is located near Ryskulbekov and N Torequlov Streets in Shymkent Kazakhstan. If you are a historian buff, this is a great place to see as the history of Kazakhstan and the oppression it was going through during the Soviet rule. It is a well-presented museum which will give you a quick look into the lives of the Kazakhs under the Soviet rule and get all the information about their relationship with Russia. 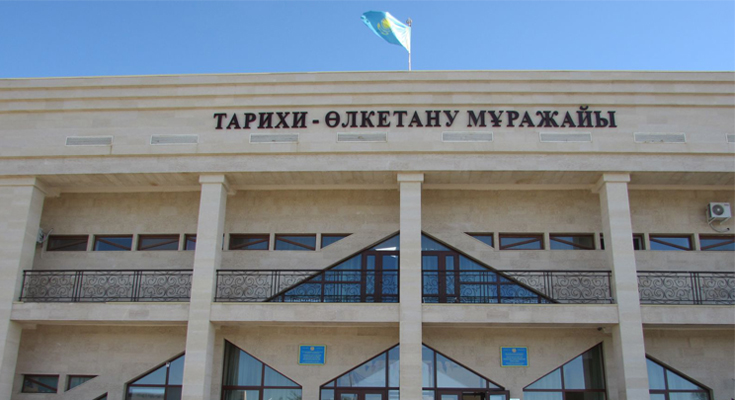 It is located on the northern outskirts of the city, the regional museum is well presented and displays local geology, Iron Age and the archaeological findings excavated from sites such as Saravan and Otrar. There’s also an interesting section on ethnography along with a splendid collection of traditional musical instruments and silver jewellery. 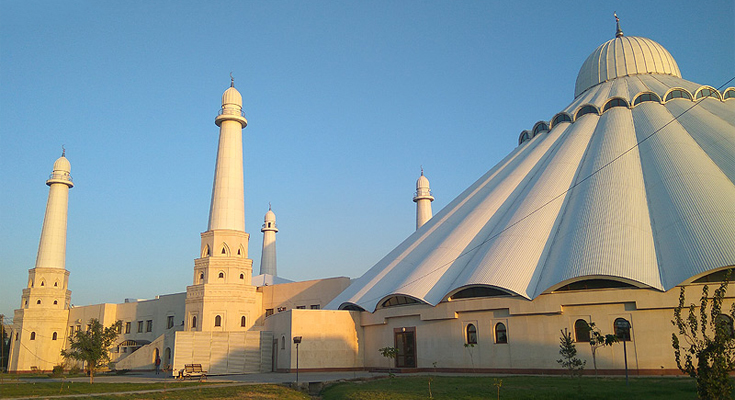 Central Mosque is the largest mosque in South Kazakhstan. It is located on Temirlan’s highway which opened on May 31, 2013. As per the architecture's point of view, it looks like the new mosque has become an adornment of the regional centre. The Charity Fund Zaid ben Sultan Al-Nahayan was the main financer of building the monument. As a whole, the area of the mosque is thirty thousand sq.m, while the main 2-storey building is 8,516 sq. The main mosque of the building is made from the white stone and adorned with a huge white dome. The complex also includes the imam’s house, ablution room and the boiling room. There are abound 700 trees and bushes were planted in and around the monument. 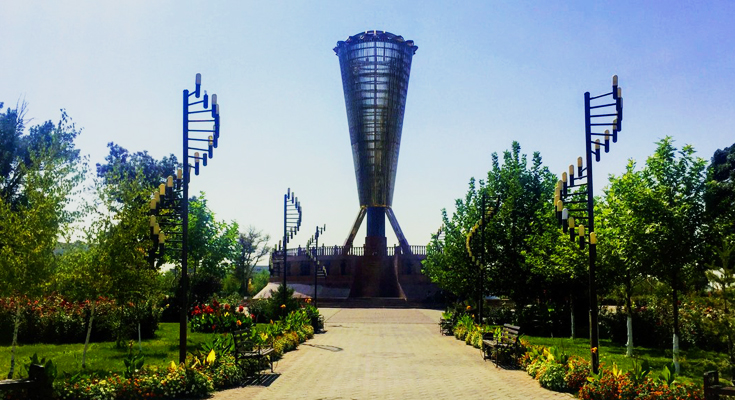 Independence Park is one of the most popular parks located in Shymkent. It was built for the 20th anniversary of the Independence of Kazakhstan in 2011. There are about 137 steel pillars put on the monument which exhibits the 137 nationalities in the country. During the summer time, the place is lighten up and gives a fresh feeling to the place with its musical fountain show. 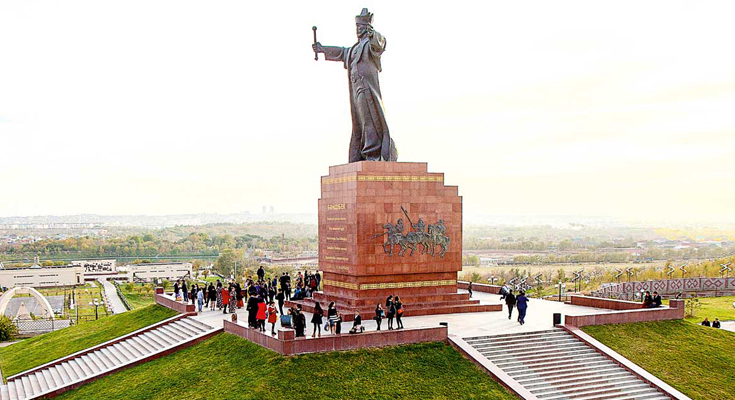 This is one of Shymkent's highest monuments located in the northern part of the city. It was made in devotion to Baidibek biy. He was an important figure who played a major role in the uniting of the Kazakh people in Kazakhstan. The monument is located on a hill at a height of 10 meters. According to the historical data, Baidibek bi was a good and reasonable person. Therefore, his sculpture is made here which stretches its arms to the sky, illustrating his open character. Today, the monument is one of the main attractions of the city, which has become an important architectural monument which united people of Kazakhstan. 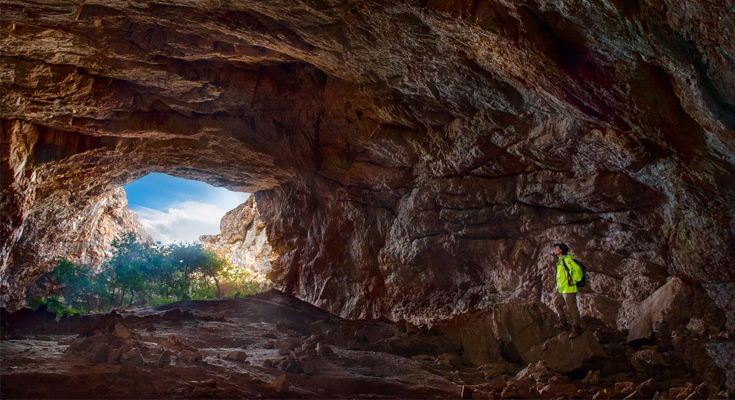 The word Akmeshit comes from the Kazakh language which means “White Mosque”. The place has created intriguing thoughts as its history has interesting legends behind it. Some say it was a sheltered place while others mention about some evil dragon stories. A lot of travellers come to see the place for its mysterious stories and history. The cave has its own eco-system inside it, called the living corner. 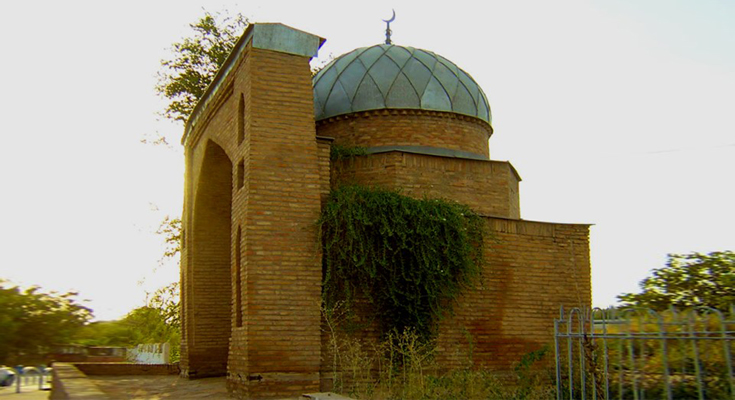 It is in Sairam village which is 10 kilometres away from Shymkent in the middle of an ancient city. Back then, there was the Ispidzhab city on the area of Sairam and now the only rare evidence that remains on the area is Khyzyr Minaret which dates back to the 9th and 12th centuries. It is a five-meter structure where Khyzyr Payaghambar was a prophet.

Things to Do in Shymkent: 1. Alley of Glory and War Memorial 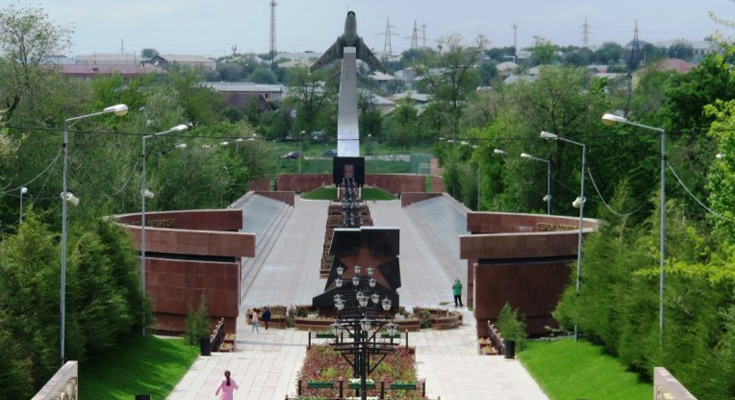 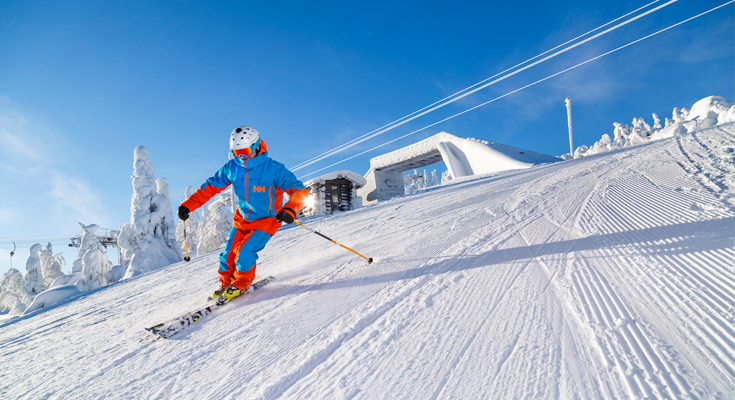 Tau Samal is located in Nysanbek which is 45 km away from Shymkent. It is nestled in between the mountains with clear water, beautiful nature and amazing air surrounding it. There is a sauna; a good sports ground, three pools and nice hiking trails. The pool is filled with the spring mountain water. In the summer time, the place offers a number of activities such as horse riding, boating, fishing and swimming. The food made in this place is all from local produce with amazing dairy products, and the local sour cream is something to try out. In the winter, it’s a great time for skiing as there are good ski slopes and lift for this activity. 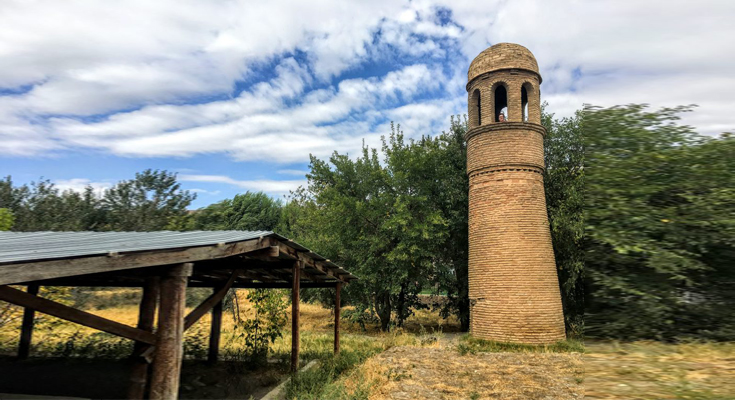 Sayram is just 10 km away from Shymkent where it has many mausoleums and holy sites. It’s an excellent place to see the religious and historical sites as a day trip or afternoon outing. In the main intersection and bazaar of the town, it is crowded and chaotic where people are shopping and buying things off the street. 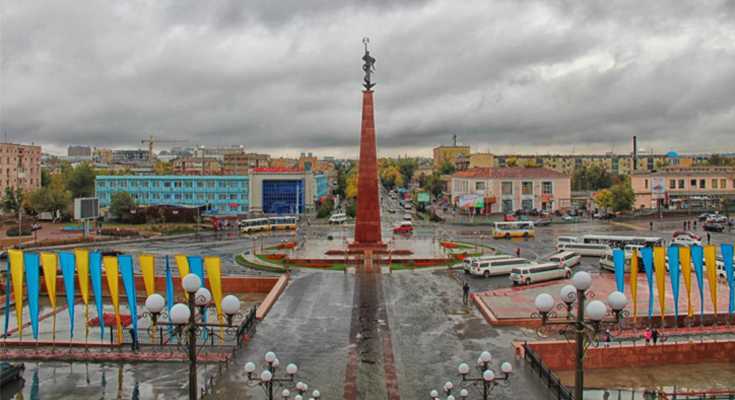 It was inaugurated in 2011 on representing the 20th anniversary of Kazakhstan independence. It can be accessed by the footbridge from Independence Monument and focus its attention on Ramizder alany containing national and ethnic symbols designed to inspire a feeling of unity and patriotism among the people of the country. 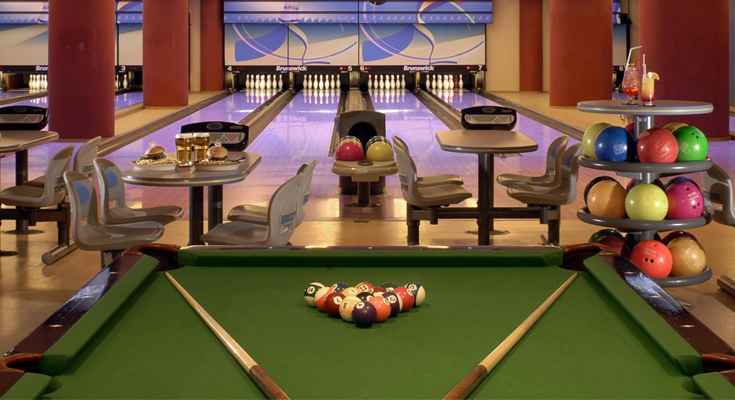 You can spend some time playing bowling and pool table at Kunayeva and Tauke Khana located in the middle of the town. It is at the Maharaja Entertainment complex upstairs next to the Spartak sports complex. 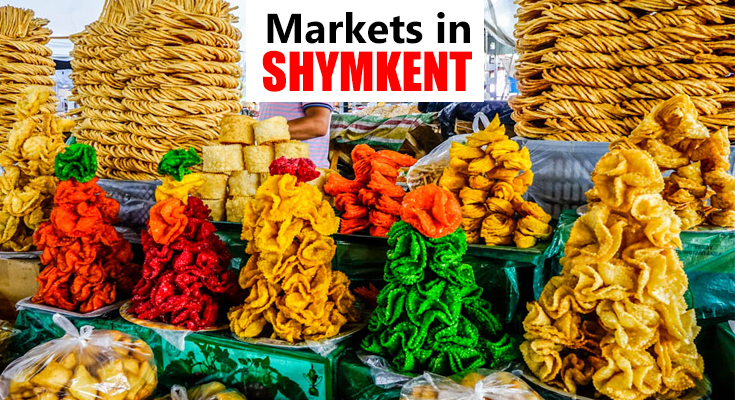 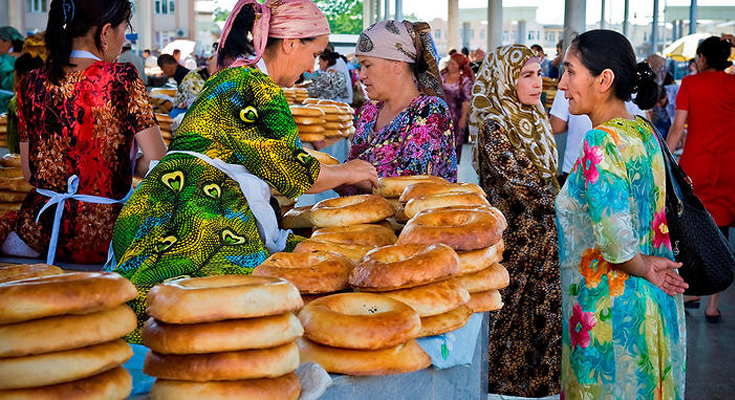 The bazaar is located next to Samal bus station on Ryskulov. It is one of the biggest bazaars in the city and it is an incredibly vibrant market where you can get items like fruits and vegetables and other hundreds of items. In the evening, there are many tourists that walk about in the market to have a look at the life and culture of the daily lives of the people in the country. 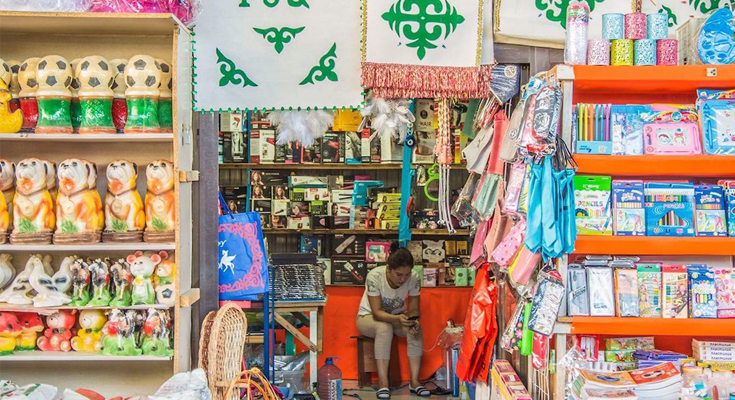 This is the most popular bazaar in Shymkent where locals do much of their shopping from meat, cheese, clothes and other household needs. The food is always fresh in this market and it’s not expensive at all. The prices in this place are cheaper and it is very convenient to reach the market.

Things to Buy in Shymkent 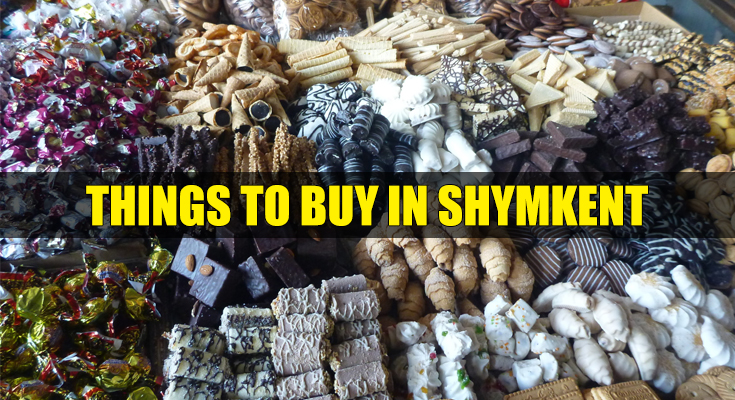 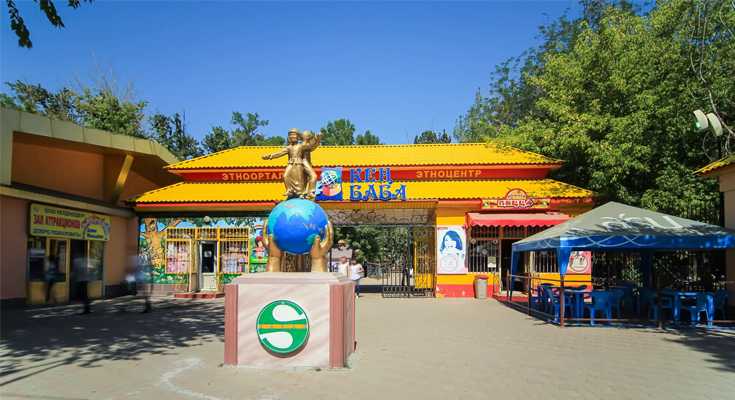 You can find a number of items in Park Ken Ba Ba on the Taukexana Street where they sell items such as magnets, camels, leather goods, figurines and plates. It’s one of the places in the whole city where you can see the local items and buy them as souvenirs. 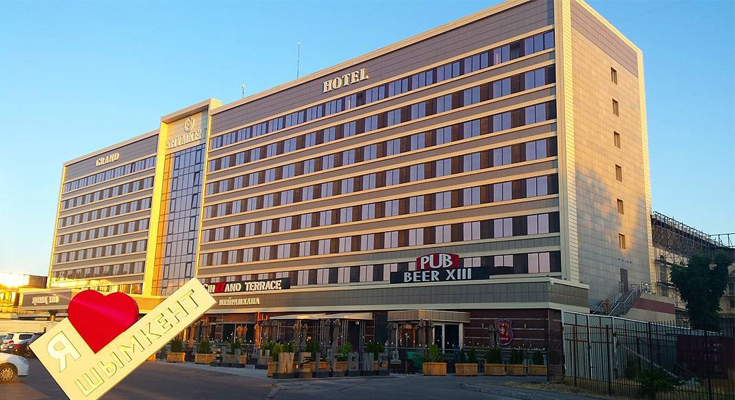 Mega mall is a western style shopping centre where you can get some retail therapy. On the ground floor is the supermarket where you can buy almost all kinds of household and necessary items. On the top floor, there a food court which has a number of fast food outlets.

Places to Eat in Shymkent 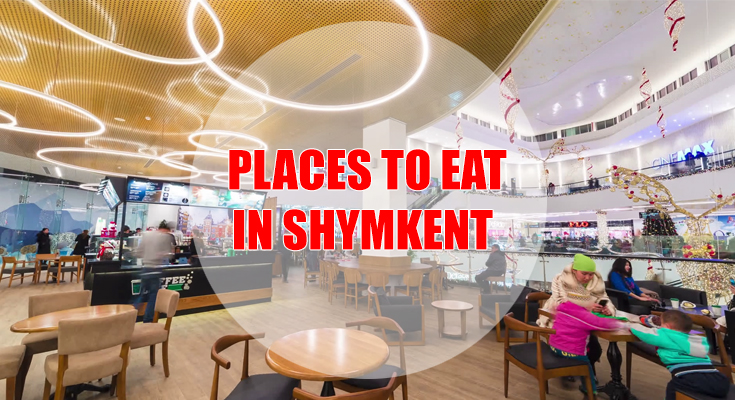 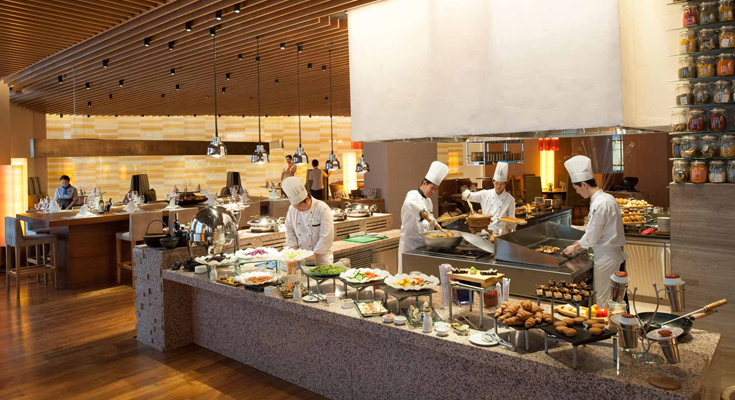 It is a beautiful open kitchen which is well decorated and provides a friendly service. The restaurant is good as compared to other places and breakfast is a delight in this place. There are great availability and choice of food is a lot more with local and other western cuisines. 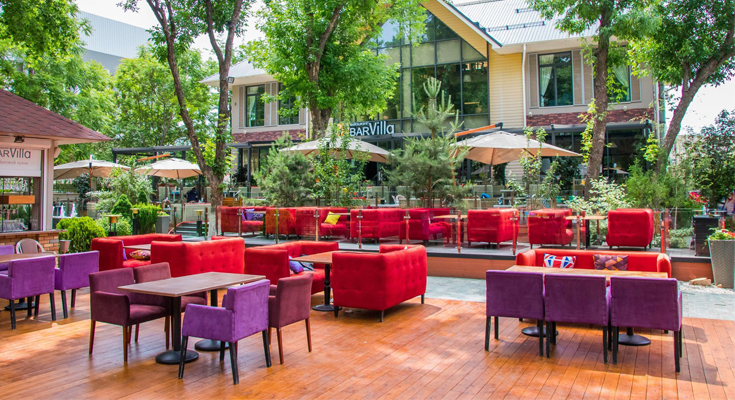 The restaurant is great for celebrating special occasions; it is so well presented with a good view and good seating. They have a great menu offering a variety of food with live entertainment and music at night. It’s a place with many offerings. 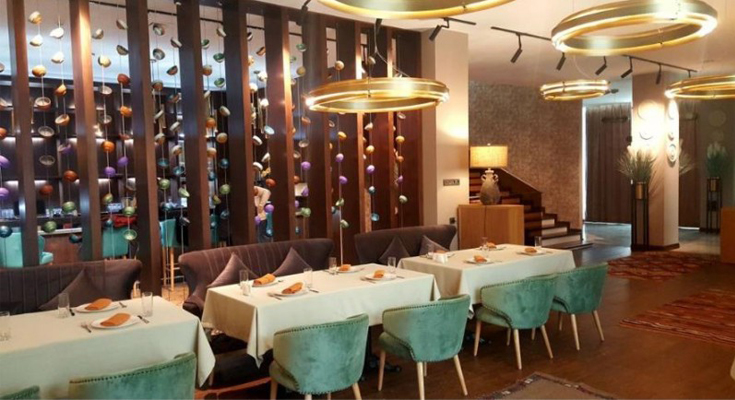 It is the best Uzbek restaurant in town where they serve great local food along with many other Europen foods. The menu offers many Uzbek cuisine and food is cooked to perfection. If you want quality food with great value for money, this is the place you should try to get some local food in its pleasant surroundings. Shymkent is a usual stop from most travellers who are going to Tashkent and it’s a good place to explore the desert area of Kazakh like Taraz and Turkestan. When it comes to nightlife in the country, it is more alive in the restaurants and bar which doubles as drinking venues. There are some great restaurants and cafes around Ken baba which are popular spots for hanging out at night and fun places for evening drinks. If you want some good live music with good food till midnight, Karavan is a highly recommended place for Shymkent Nightlife. 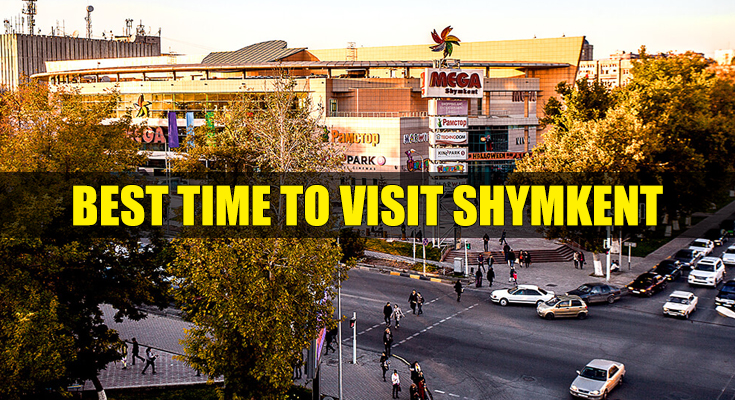 The average temperature in Shymkent varies throughout the year. Leaving aside the humidity, the temperatures are nice between summer and winter. The summer time is very hot and dry while the winter is partly cloudy and cold. The clearer part of the year in Shymkent begins from the month of May and ends by the month of October. Summer in Shymkent is refreshing and it’s beautiful with mountainous picnics spots, sauna, spring water and swimming pools. While winter offers a great time to experience the snow with a number of ski resorts and ski activities to enjoy your holiday.