Cathedral in the simplest term means a Christian church. A church that contains the seat of bishop, so serves as the central church of diocese, conference or episcopate is a cathedral. So it is a sacred place with administrative roles and position. Russia is a country with numerous cathedrals in different parts of the country. Some of them are quite old with lot of historical significance. One of them is cathedral of St. Sophia. Built between 1045 and 1050, this is said to be the oldest church building in Russia. This 1000 years old church has lot of old elements of its own for visitors to see. Let us see more about Cathedral of Saint Sophia in Novgorod. 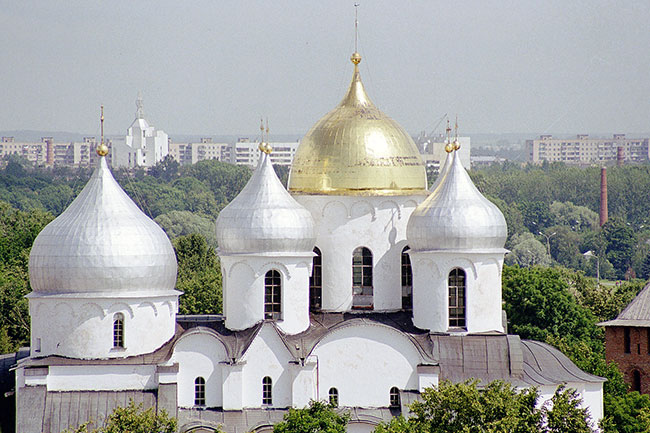 Cathedral of Saint Sophia is a 38 meter high, 5 domed stone building. It was built between 1045 and 1050. It was built to replace an oaken cathedral and is said to be the oldest church in Russia with exception of two churches Arkhyz and Shoana which are the oldest building of any kind still in use in Russia. If it is so old then it is bound to have its story. So the story is that cathedral was built by Vladimir of Novgorod as an expression of gratitude to the people of Novgorod for their support of Vladimir’s father Yaroslav in his struggle for Kiev. This 5 domed cathedral had replaced 13 domes wooden church built in 989 and had the importance of being the main temple of the town. Though the name of the cathedral is St. Sophia, however the cathedral was not named after any female saints of that name. The name comes actually from the Greek for wisdom and so Cathedral of St. Sophia is dedicated to Holy wisdom of God. This cathedral holds significance as city’s great necropolis, the burial place of prominence in the history of the city which includes several princes and posadniks and some over 30 bishops archbishops and metropolitan of Novgorod. The cathedral of St. Sophia did see damages through the years because of fire on few occasions. However few things preserved. One of those preserved things is amazing pictures of Saints Constantine and Helena which was made using unique techniques by an ancient artist. 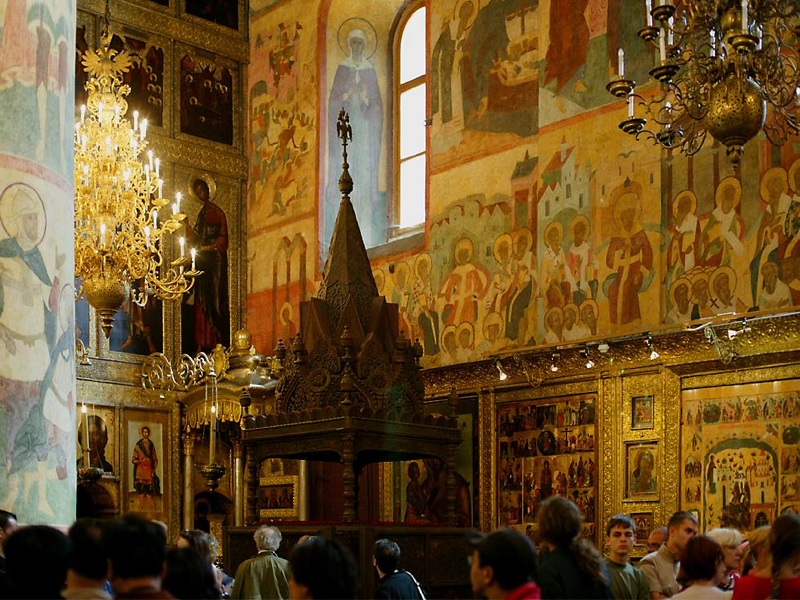 The Cathedral of Saint Sophia can easily be said to be one of the most important monuments of ancient architecture in Russia. The cathedral was built some 1000 years ago and reflects the enormity of its proportions and the huge impact of it on the life of people of Novgorod and ancient Russia. Throughout the centuries, this cathedral saw allot and influenced the life of Novgorod. In the early years this place was used as burial place for the princes which later on became a ceremonial and spiritual center during 12th-15th centuries. From the outside the cathedral looks beautiful with its 5 domes and interiors of the cathedral are beautiful with series of interesting and ancient door and religious icons. In fact first or the oldest icon is said to be that of icon of Mother of God of the Sign who saved Novgorod as per the legends in 1169 from the attack of Suzdalians. Wall paintings are amazing. Frescoes of Saint Constantine are unique. This Russian church is still beautifully maintained and is place of peace. The cathedral has kept its orthodox character.

So the cathedral of St. Sophia is a depiction of ancient Novgorod’s and Russia’s life and religion reflected through its wall paintings, frescoes and icons in the interiors of the cathedral. It is a real masterpiece of Russia’s ancient architecture. If you see the architectural beauty of this cathedral then you must say that how come it took only 5 years to complete this masterpiece. So in a sense it shows the brilliance of architects of that time. Now there are many features of St. Sophia which are worth seeing and exploring. So it is highly advisable that if you happen to take a Russia Travel Package then do go for visiting the Cathedral of St. Sophia in Novgorod.