“Pyramid” is a Greek word to which many of us were introduced through textbooks, stories, movies, and cartoon shows. It is a structure whose outer surfaces are generally triangular in shapes which converge to a single step at the top, thus making the entire shape a pyramid geometrically. Pyramids were the largest man-made structures on earth for thousands of years. One of the largest and the oldest pyramids in Egypt is The Great Pyramid of Giza. Also known as Pyramid of Khufu or the Pyramid of Cheops is the only remaining piece out of the seven wonders of the ancient world.

Wondrous Facts about the Pyramids of Giza 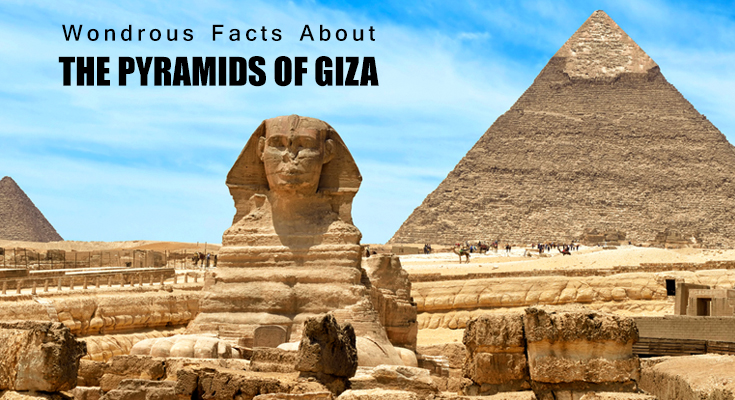 The Giza pyramids were constructed some 4,500 years ago. Out of the 3 pyramids, the Great Pyramid of Giza is the oldest one which was built around 2560 BC as per the Egyptologists. However, after thousands of years, this is the only pyramid that still stands intact mostly.

2. This is the only remaining wonder of the ancient world

There were some remarkable constructions included in the list of seven wonders of the ancient world. However, out of those 7 in the current times, only one is remaining which is the Great Pyramid of Giza. People coming to Egypt cannot miss this huge tourist attraction.

3. The pyramid has tombs, an afterlife resting place

One of the interesting facts about Great Pyramid of Giza is that it is believed that it was constructed as a tomb for the 4th Dynasty Egyptian pharaoh Khufu. They wanted to prepare for the next world after their death. Temples to the gods and massive pyramid tombs were constructed for keeping their bodies intact along with several items each ruler would need to guide and sustain himself in the next world.

These ancient pyramids of Giza are the engineering feats at Giza. They are so impressive that even today it is hard to know how they were built. The Great pyramid of Giza at 481 feet tall was the tallest structure ever built for a long time. And the visitors find them beautiful and mystical worth exploring on Egypt Tour.

This is also one of the amazing facts of Great Pyramid of Giza. It has been estimated that more than 2 million about 2.3 million stone blocks were used to build the pyramid. Each stone block weighs between 2.5 to 15 tons on average.

6. It preserves an ancient vanished world

Egypt is one of the oldest civilizations in the world. Pyramids of Giza were not an only amazing piece of engineering brilliance which was built for some spiritual purposes but over the time they have also kept the vanished world preserved. In the decorated tombs inside the pyramid, you can experience every aspect of life in ancient Egypt.

7. There are three chambers inside the great pyramid of Giza

There are 3 burial chambers inside the great pyramid of Giza which were intended to house Khufu along with various goods and treasurers that he would carry with him in his afterlife. Inside the pyramid, one must explore these chambers going through very tight ascending and descending passageway as they were pharaoh’s final resting place.

8. It took a huge number of skilled labors to build the pyramid

To make such a beautiful and unique structure it took a few hundreds of thousands of skilled labor as experts believe today. These people included stonemasons, engineers, architects, surveyors, builders, and other craftsmen. They worked in the summer months in hot conditions to build the pyramid whose work is still admired by millions across the world who visit the Great Pyramid of Giza.

9. The great pyramid of Giza is the last one in the league

The Great Pyramid is the last of the three pyramids here. The pyramid was built with a swivel door but that door does not exist in the pyramid anymore. The other two pyramids in Egypt which had the swivel door were of Sneferu – Khufu’s father and Huni – Khufu’s grandfather.

10. It is a great work of math, geology, and astronomy

Out of several facts about Pyramid of Giza, this is of great interest to many especially to those who wish to explore the science behind the construction of the pyramid. Well, the great pyramid is a super work of mathematics, geology and astronomical science. For example, The Great Pyramid sits right on top of the Earth’s geographical center.

11. There are tombs for the relatives of Khufu as well

Khufu’s pyramid complex has not only his tomb but also there are three small pyramids made for his wives. Tombs were made for his relatives and officials too who would join Khufu on his afterlife journey. Khufu’s son and grandson also built pyramids.

12. There is hardly anything remaining in the chambers

Though the king’s chamber was filled with several items over the time, constant looting took place and it left the interiors of the pyramid barren except for Khufu’s red-granite sarcophagus. But one need not be disappointed as the chambers are still worth seeing and experiencing in person.

13. The great pyramid of Giza is the symbol of Egypt

A pyramid is not just a brilliant monument but it has been and continues to be the symbol of Egypt. The word pyramid is automatically associated with Egypt as these pyramids had a great mythical and spiritual place in Egypt’s early civilization. It was also one of the seven wonders of the ancient world which remains mostly intact.

14. The great sphinx of Giza is another great attraction near the pyramid

The Great Sphinx of Giza is a unique limestone statue of a reclining sphinx. Sphinx is a mythical creature whose body is of a lion and the head is of a human. You must see this wonderful attraction along with the great pyramid of Giza.

15. Pyramids of Giza offer a great opportunity to children

Children are quite fascinated by amazing things in the world. If you are going on for a family tour to Egypt, do take your children to the pyramids of Giza. They will be exposed to some beautiful and impressive human creation along with the culture and tradition of Egypt along with the afterlife theory.

Why Choose Dook for Giza Tour? 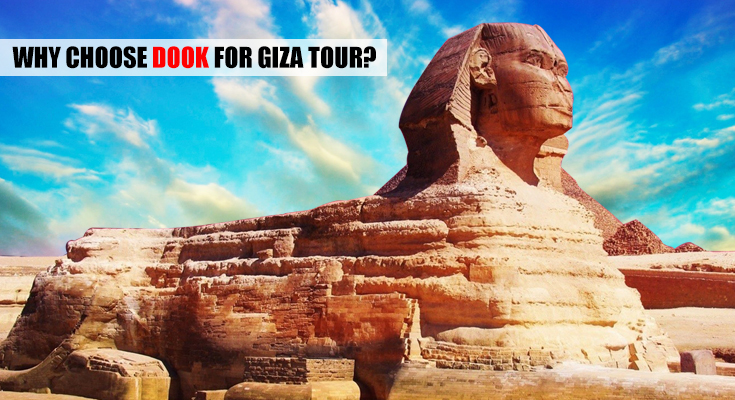 Egypt is a land of mythology, pyramids and modern tourism infrastructure with plenty of sightseeing options. You can explore the best of Egypt and Giza with Dook international’s best Egypt Tour Package. You will enjoy a great time the pyramids of Giza and other places here.