Himalaya has been described by thousands of people in different ways yet no one has been able to spell the beauty and mistery of it in words. Those who have not visited Himalayas want to go there at-least once in their lifetime and those who have been there cannot stop wishing to explore more of it. Once Himalayas used to be a place where only braves reached but over the years development of roads and infrastructure has made it possible to access some great parts of Himalayas for many. They are not just Indians, Chinese or Nepalese but people from all parts of the world just love to come and touch the beauty of Himalayas. The existence of Himalayas in India and the topography of various locations give the country the tag of being one of the most fascinating trekking places on the globe. Trekking and mountain adventure in the Himalayas give everyone a chance to gain an insight into the archaic pulchritude of the places along with intriguing flora and fauna of it.

Everest is probably the name everyone knows as this is the highest peak in the world but this is not all. In India alone there are several trekking and mountain adventure peaks of Himalayas which one can explore. Exploration has now become easy as well; however challenges of an unpredictable mountain remain there always. So, let us see some of the trekking in the himalayas here:

This peak is in Ladakh in the Himalayas in the upper regions of Jammu and Kashmir in India. Those who have experienced Zanskar Frozen river peak found everything about it exceptional. The panorama, atmosphere, people, and the frozen river, caves, sledges and ever changing Chadar (ice sheet) everything here is simply magical. For all those who want to have an unimaginable experience must walk on the ice covered river of Zanskar. Trekking here in the Himalayas is absolutely fascinating. The trek is also named as Chadar (blanket) trek. 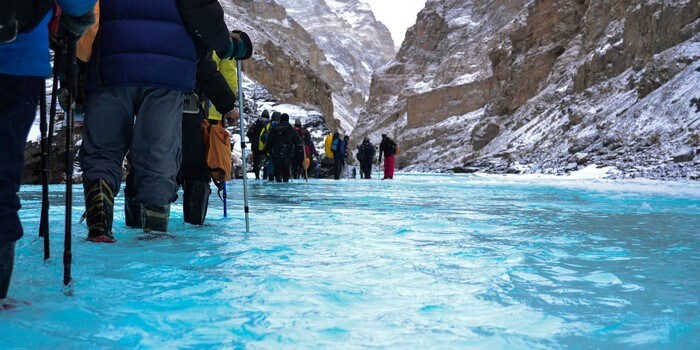 Spring water does not allow this icy blanket to completely smothering the river, and so in some places, retains its rapids; which looks awesome in temperature of -25 to –30 degrees. One can trek by shuffling along the ice sheet where they can see it breaking and changing color on the river every few hours. The trek is magnificent and challenging trek sometime, but you do get opportunities to relish ancient Buddhist monasteries and secluded villages nestled in the depths of the deep gorges valley of Trans Zanskar ranges.

Ganga is the holy river in India coming from the region of Gomukh in Garhwal in Himalayas in the state of Uttrakhand. Ganga has different names along its path to the planes. Bhagirathi is one name that it has in the upper regions in the mountain. You can take trek along the holy river Bhagirtahi River and reach the source of the river where it is known as ‘Gomukh, Cow’s at the base of the Gangotri Glacier.

Trekkers camp at Tapovan where you get to experience some of the rarest sites in Himalayas. The view of eight enthralling peaks- Bhagirathi I, II, III, Mt. Shivling, Chaturangi, Meru Parvat, Bhirgupanth and Sudharsan is beyond words. There are other peaks also which provide full view of the Gangotri Glacier. As trekkers you want to gain sight of maximum beauty at one place as you don’t go there every other day. Goumukh Tapovan trek offers you all that and much more. The good things about this trek is that it can be undertaken by novices also who have good health conditions. Camping at Tapovan, a huge meadow for tourists is exciting.

This is another great trekking in Himalayas in the region of Garhwal. At the height of above 4000 meters this is widely liked among the trekkers in the world. Kuari Pass Trek along the way offers you startling vistas of the snow capped peaks of the Greater Himalayan Range. This is also popularly known as Lord Curzon’s trail. This trek goes through the lush valleys, thick forests and small villages where you can touch the well preserved culture of people living here. When you get to Kuari Pass, you are rewarded with panoramic views of the magnificent peaks of Nanda Devi, Chaukhamba, Kamet, Hathi-Ghodi Parvat and Dronagiri. 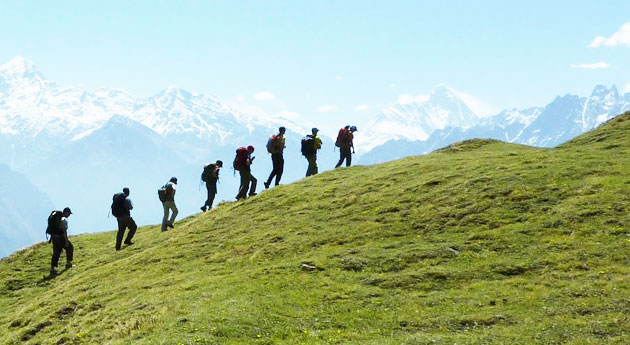 This is another wonderful trek in Kumaon region in Himalayas. Trekkers can explore the fascinating Nanda Devi East Base Camp and astounding Milam Glacier here. This part of Himalaya in Kumaon is an eye-catching area. This borders to the western end of Nepal and consists of the famous mountain of Nanda Devi at the height of over 7800 m. Many explorers from around the world have been fascinated by this part of Himalaya.

This trek trails the Gori Ganga ravine to the village of Milam and then goes to the East Base Camp of elating Nanda Devi. This is considered one of the best treks in India. Nearby Nanda Devi along with the adjoining peaks, is a mesmerizing landscape combined with the mesmerizing historical background of the area.

This is probably the best trek as from the Singalila Ridge, you can see a huge vista of peaks stretching for 700 kilometers. Four highest mountains of the world Mt Everest (8850m), Makalu (8481m), Lhotse (8516m) and Kanchenjunga (8585m) are included in this site. The natural beauty here is unparalleled which makes Singalila Kanchenjunga a striking trek. The Singalila Ridge, near Darjeeling, offers outstanding view of Kanchenjunga which is world’s third highest peak.

From Singalila you can take a long but exciting approach to Goecha-La pass below Mt. Kangchenjunga. On this route, trekkers enjoy the the enchantment of Himalayas upland trekking. Those trekking here are for enticing challenge of the 5000 mts high Goecha-La at the end. The elevation however is more gradual, and you get ample time to familiarize yourself with the climate.

So, these are some amazing trekking and mountain adventure in some great peaks of Himalayas in India. When you are on an India Tour then you must go for trekking in some of these places especially of you are adventure lovers and you have sufficient time in hand to explore these best parts of Himalayas.