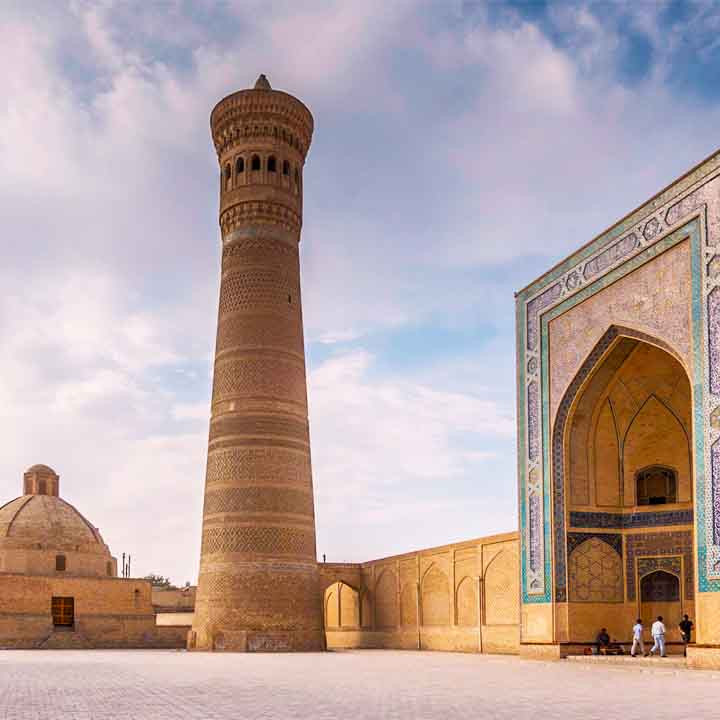 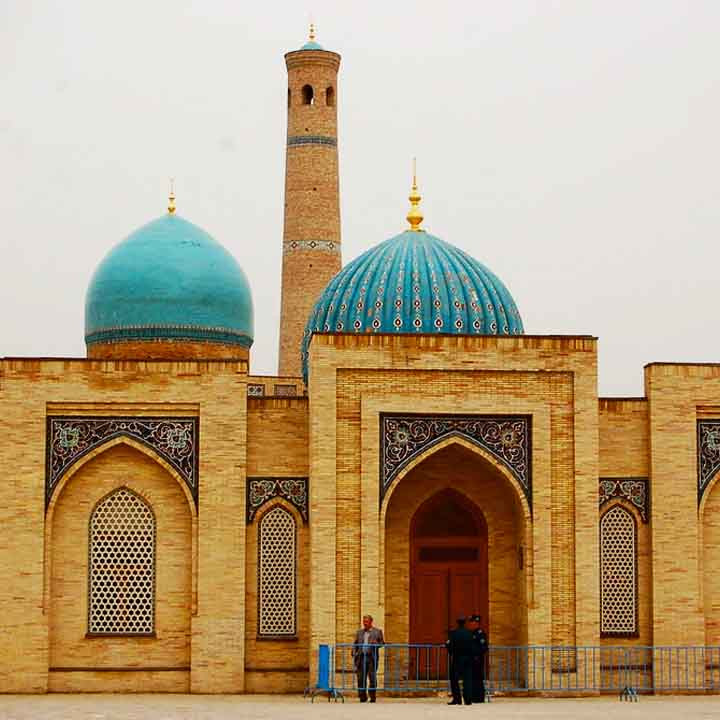 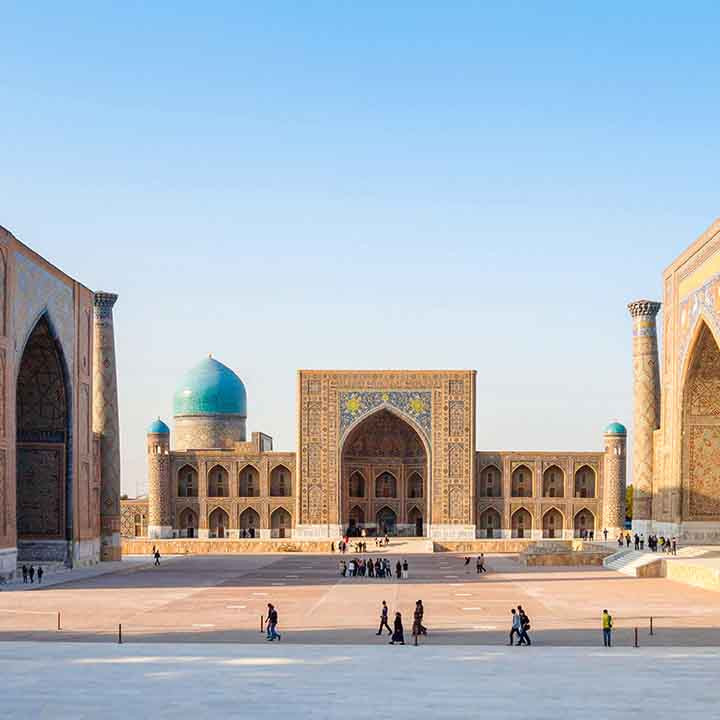 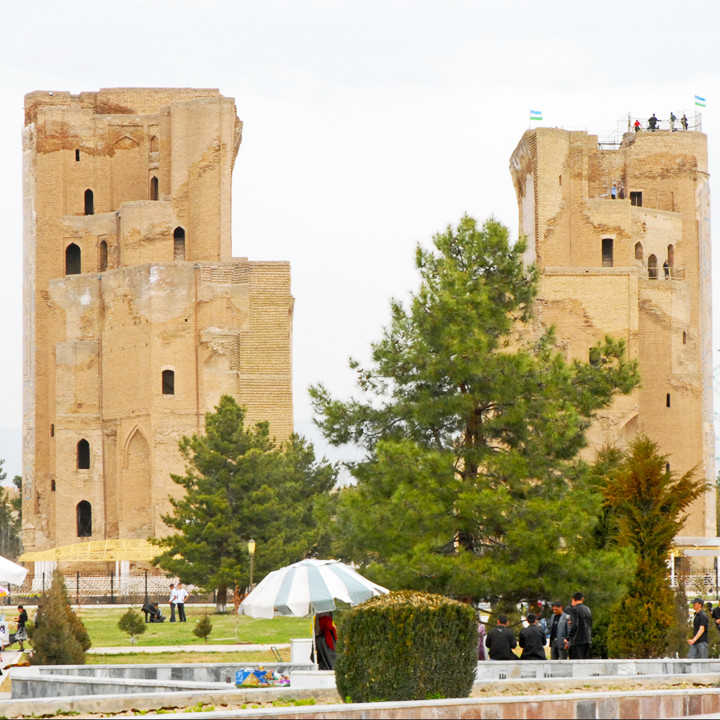 Shah-i-Zinda is a necropolis in the north-eastern part of Samarkand Uzbekistan.

The Bibi-Khanym Mosque is one of the most important monuments of Samarkand. In the 15th century it was one of the largest and most magnificent mosques in the Islamic world. By the mid-20th century only a grandiose ruin of it still survived but major parts of the mosque were restored during the Soviet period.

Timur began to think of building a magnificent edifice summoned an architect and set out his objective. After listening to the ruler the architect asked to be allowed into the state exchequer. When permission was granted the craftsman started to make foundation blocks from clay mixed with gold in full view of Timur.Seeing that the ruler remained impassive he broke up the blocks and returned the gold to the exchequer. When Timur asked Why did you do that the architect replied So as to make sure of your determination to embark on constructing a building that requires vast expenditure. A second legend recounts that after the main building work had been completed Timur began to tell the craftsmen to hurry up and finish the decorative facing of the palace.

Kok-Gumbaz Mosque was built in Dorut-Tillavat Memorial complex just opposite to Shamsiddin Kulol Mausoleum in 1435-1436. It is the largest Friday mosque in Shakhrisabz. The inscription on the portal announces that the mosque was constructed by Ulugbek on behalf of his father Shakhruh.The building of the mosque is crowned by a huge dome covered with blue ceramic tiles. It gave the name to the mosque Kok Gumbaz that means Blue Dome. Around the tholobate of the dome there is the inscription with white glazed tiles Sovereignty belongs to Allah wealth belongs to Allah.The internal space of Kok-Gumbaz Mosque is nearly square in its layout and has four deep niches carefully oriented to the each corner of the earth. The whole wall surface was covered with ganch stucco and painted with intricate dark and light blue ornaments.

It is a historical mosque and inscribed in the UNESCO World Heritage Site. It was built in 1712 and was under the Bolshevik Russian rule in the 1920s.Bolo-Khauz Complex is the only preserved monument on the Registan Square. It is located on the opposite site of Ark - the Emirs fortress. The complex consists of the reservoir Friday mosque and minaret.The most ancient part of the complex is the pond (Khauz) which is called as Bolo-Khauz (Childrens reservoir). It is one of several ponds in Bukhara that reached our days. In past these reservoirs were the water source for the population and unfortunately the source of many deseases. Therefore most of them were drained.

There are only four trading domes which exist in Bukhara namely the Toki-Sarrofon Trading Dome Telpak Furushon Trading Dome Tim Abdullakhan Trading Dome and Toki-Zargaron Trading Dome.Bukhara is well-known to the world not only with its mosques Ark Fortress and the majestic Kalyan minaret but also with its trading domes stretching in procession from Lyabi-Khauz to the Miri-Arab madrasah. Long ago in the XVI century under the Shaybanides dynasty Bukhara became the capital giving rise to unprecedented growth of the city and since it was located on the Great Silk Road the markets and trading stores even more congested cross-roads of public roads. Several centuries passed since that and four trading domes have only survived up to date.

in 1686 Arang-khan began the construction of the citadel Kunya-ark at the western gates of Ichan-kala. The ark presented a complex multi-yard composition containing a house for khan the members of his family and dignitaries.From the large numbers of constructions of the ark only several buildings of the nineteenth century and the beginning of the twentieth century were preserved. They were the official reception hall (kurinishkhana) a mosque the mint and a harem.There was an outer yard serving as a waiting room for the khans audiences. There were cannons in a second yard.The Akshikh-bobo aivan has also been used for military observation.the yards with their splendid aivans.

Djuma (Friday) mosque in the center of Ichan-kala. It was erected at the end of the eighteenth century over the ruins of previous construction. This is an original building without portals and cupolas without galleries and yards. It is 55x46 m. One can enter the mosque from four sides. From the northern facade facing the one of the main streets of the city the mosque faces a minaret 52 m. high.The building is fenced with brick walls. The interior space is a single hall the flat ceiling of which is supported by 215 wooden pillars.Small openings were made in the ceiling for light and ventilation of the hall.The interior is simply plastered. Spaces between the windows are painted in black and red colors trees bushes and irises are realistically represented symbolizing the wish of peace and tranquil in the monumental and decorative art of Central Asia.

The Palace of Khudayar Khan known as the Pearl of Kokand was the palace of the last ruler of the Kokand Khanate Khudayar Khan.The palace of the Khan of Kokand with seven courtyards and 114 rooms was built in 1873 though its dazzling tiled exterior makes it look so perfect that youd be forgiven for thinking it was as new as the modern park that surrounds it. Just three years after its completion the tsars troops arrived blew up its fortifications and abolished the khans job.Roughly half of the palace used to be taken up by the harem quarters which the Russians demolished in 1919. Khudayars 43 concubines would wait to be chosen as wife for the night Islam allows only four wives so the khan kept a mullah at hand for a quick and short-lived marriage ceremony.Six courtyards remain and their 27 rooms collectively house the Kokand Regional Studies Museum.

he Jami Mosque is the true decoration of Kokands Chorsu square. Citizens cannot imagine their city without this magnificent mosque. It seemes that it was always on that site. And indeed in historical chronicles of IX-XII centuries there are mentions of the mosque in Kokand which stood in the same place on the square Chorsu. But during the Mongol invasions the Jami Mosque as well as the entire city was destroyed.the present mosque was built in the XIX century. In 1805 Kokand Olimhan started to build a mosque but construction was suspended the superior of the mosque stood up against the construction of mosque at the expence of funds collected by force from the common people.Two years later the Jami Mosque was built.

Send us a query for Tashkent Tour 12 Nights