Discover the heritage and the culture of the mystical land of Armenia. Visit the numerous medieval monasteries that dot the country, stroll around the pink city of Yerevan and have a picnic on the banks of Lake Sevan, the jewel of Armenia. Ride the world’s longest cable car to the imposing Tatev Monastery and check out the energetic nightlife of Yerevan. 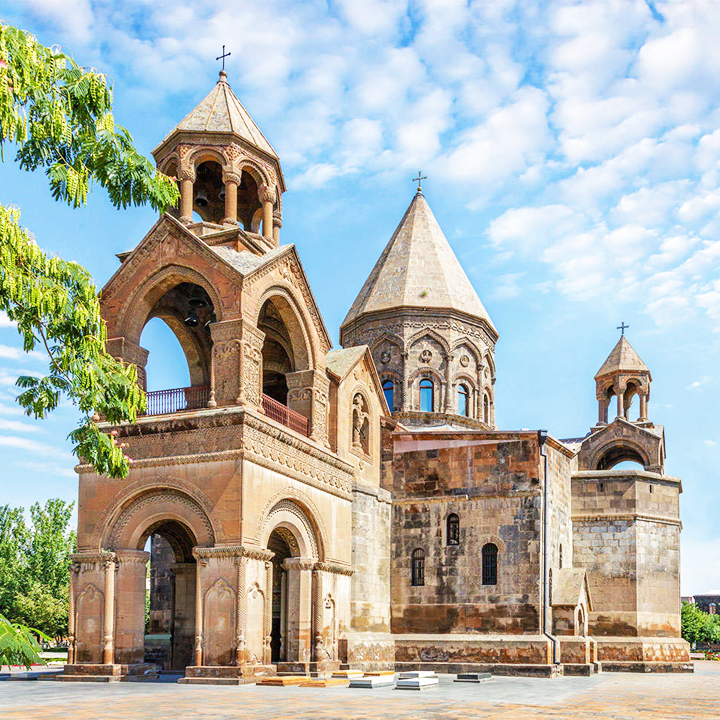 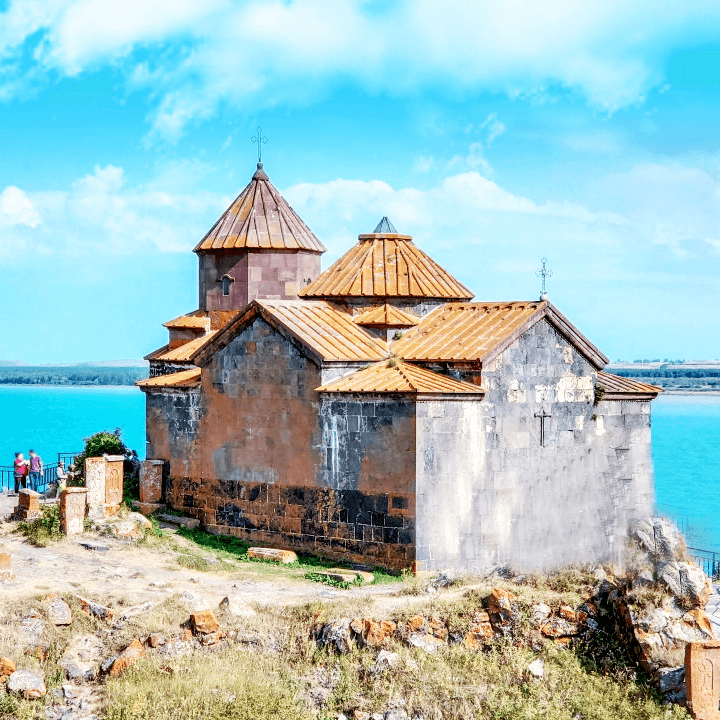 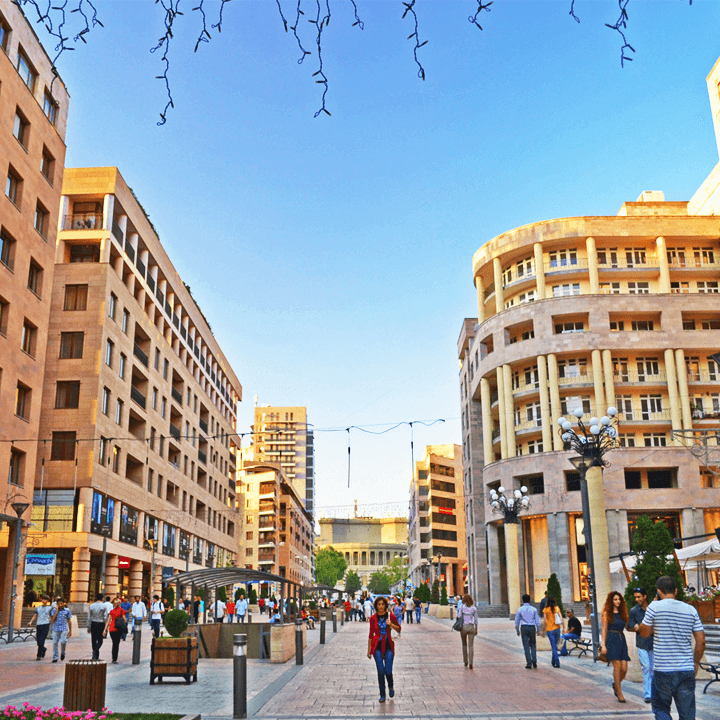 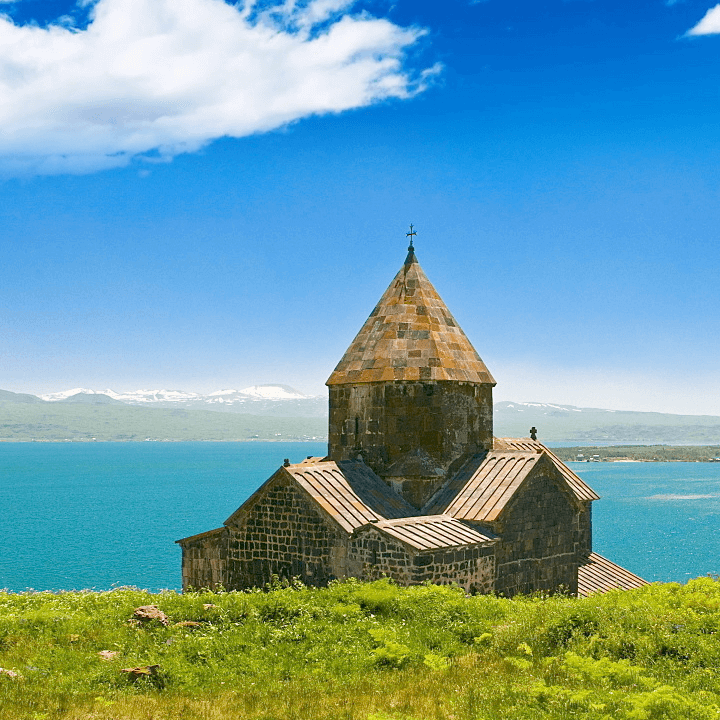 Republic Square is the central town square in Yerevan the capital of Armenia. It consists of two sections an oval roundabout and a trapezoid-shaped section which contains a pool with musical fountains. The square is surrounded by five major buildings built in pink and yellow tufa in the neoclassical style with extensive use of Armenian motifs. This architectural ensemble includes the Government House the History Museum and the National Gallery Armenia Marriott Hotel and two buildings that formerly housed the ministries of Foreign Affairs and Transport and Communications. The square was originally designed by Alexander Tamanian in 1924. The construction of most of the buildings was completed by the 1950s the last buildingthe National Gallerywas completed in 1977. During the Soviet period it was called Lenin Square and a statue of Vladimir Lenin stood at the square. Soviet parades and celebrations were held twice a year until 1988. After Armenias independence Lenins statue was removed and the square was renamed. It has been described as Yerevans architectural highlight and the citys most outstanding architectural ensemble

Geghard Monastery or (Airivank) was founded in 4th century. Geghardavank is a holy place, where the spear by which Jesus Christ was pierced on the cross by Roman soldier, is kept. The monastery is designated by UNESCO as World Heritage Site. Geghard is a medieval monastery in the Kotayk province of Armenia, being partially carved out of the adjacent mountain, surrounded by cliffs. The spectacular towering cliffs which surround the monastery are part of the Azat River gorge, and are listed together with the monastery as the world heritage site. Some of the churches in the monastery are cut out of cliff rocks entirely, while are little more than caves and some are elaborate structures which has complex wall sections and rooms deep inside the cliffs

The Khor Virap (meaning "deep well") is an Armenian monastery located in the picturesqe Ararat mountains in Armenia, near the closed border with Turkey. Grigor Luisavorich (St. Gregory the Illuminator) was imprisoned here for 13 years before curing King Trdat III of a disease. This caused the conversion of the king and Armenia into the first officially Christian nation in the world in the year 301. Khor Virap is located on hillock in Pokr Vedi, the village which is 4 KM away from the main highway there. This is just 30 KM from Yerevan, the capital and most happening city of Armenia. What is most interesting thing about Khor Virap is its history. Khor Virap was used as royal prison

Wine heaven in Armenia. visit to historical Areni Winery and have a tour in wine storage .Accompanied with wine tasting at personal cost

The Cascade is a giant stairway made of limestone in Yerevan Armenia. It links the downtown Kentron area of Yerevan with the Monument neighborhoodCascade Yerevan is the beating heart of the city. It is where the youth gathers for drinks it is where all open-air concerts are held it is where you can capture the best panorama of Yerevan. Cascades benefits are probably countless.Due to the Armenian-American businessman and art collector Gerard Cafesjianss investments and connections Cascade has become a valuable open-air and free-access modern art museum.

Armenian National Academic Theatre of Opera and Ballet named after Alexander Spendiaryan in Yerevan was officially opened on 20 January 1933 It consists of two concert halls the Aram Khatchaturian concert hall with 1400 seats and the Alexander Spendiaryan Opera and Ballet National Theatre with 1200 seats.Since it was opened the Armenian National Opera & Ballet Theatre has performed more than 200 different operas and ballets by Armenian Russian and Western European composers.

Situated in Yerevan less than 1 km from Armenian Opera and Ballet Theatre and a 12-minute walk from Republic Square Swan lake features air-conditioned accommodation with a balcony and free WiFi. The property features city and mountain views and i

Garni Temple is in a very strategic location, on a cliff, overlooking a range of the Geghama Mountains and Azat River near the Ararat Plain. Built in mid-1st century CE, the temple survived the destruction of pagan temples and countless invasions until its collapse in 1679 CE. It is best known structure and symbol of pre Christian Armenia. The temple was dedicated to the sun of God called as Mihr. But when Armenia took to Christianity in 4th century this temple was converted into a Royal Summer House. Garni is also an exemplary example of great geometrical design. Garni perfectly follows the Pythagorean and Platonic theories of sacred geometry in its design, a design for civilization carved form the wilderness. So, It is a major tourist attraction in Armenia.

Noratus cemetery also spelled Noraduz is a medieval cemetery with many early khachkars located in the village of Noratus Gegharkunik marz near Gavar and Lake Sevan 90 km north of Yerevan.

Noravank is a 13th-century Armenian monastery located 122 km from Yerevan in a narrow gorge made by the Amaghu River near the town of Yeghegnadzor Armenia. The gorge is known for its tall sheer brick-red cliffs directly across from the monastery. The monastery is best known for its two-storey Surb Astvatsatsin church which grants access to the second floor by way of a n

Sevanavank is a monastic complex located on a peninsula at the northwestern shore of Lake Sevan in the Gegharkunik Province of Armenia not far from the town of Sevan. Initially the monastery was built at the southern shore of a small island. After the artificial draining of Lake Sevan which started in the era of Joseph Stalin the water level fell about 20 metres and the island transform

Zoravor Surp Astvatsatsin Church is the oldest surviving church in Yerevan. It was previously known as Surp Astvatsatsin. However the name Zoravor was added because the church was home to the 13th century bible of Zoravor.

Lake Sevan is the largest lake in Armenia and one of the largest freshwater high-altitude Alpine lakes in Eurasia as well as a popular summer beach destination. It has many resorts, cabanas, fish restaurants and other attractions for visitors. Lake Sevan is at an altitude of 1,900 meters and located 70kms from Yerevan. One can visit Sevanavank Monastery, then head south to Hayravank Monastery and Noratus Cemetary nearby. It is one the most beautiful Attractions in Armenia

Visa info from India to Armenia

Send us a query for An awesome Armenian adventure