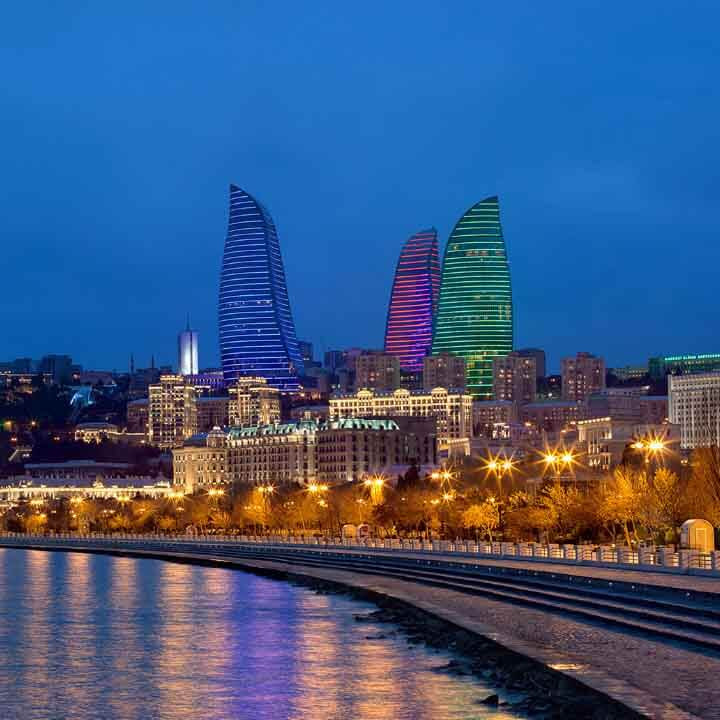 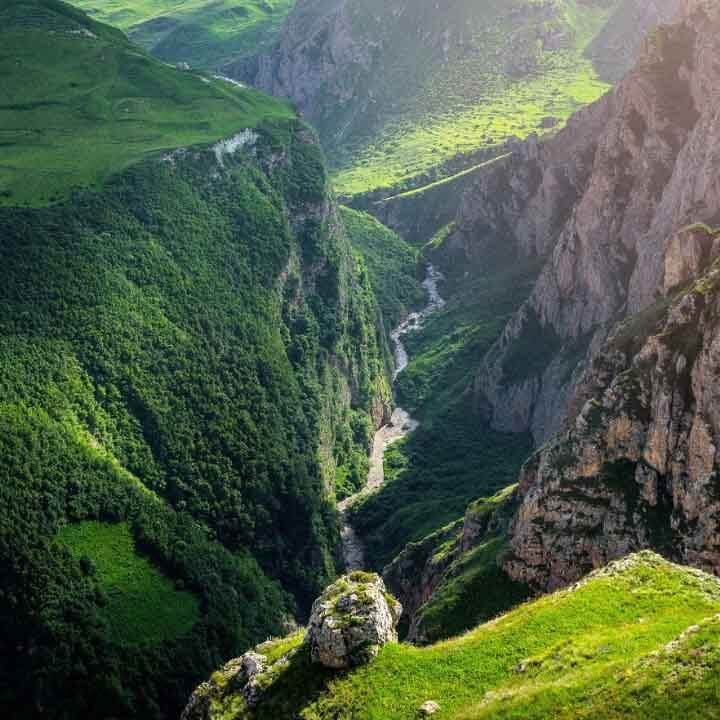 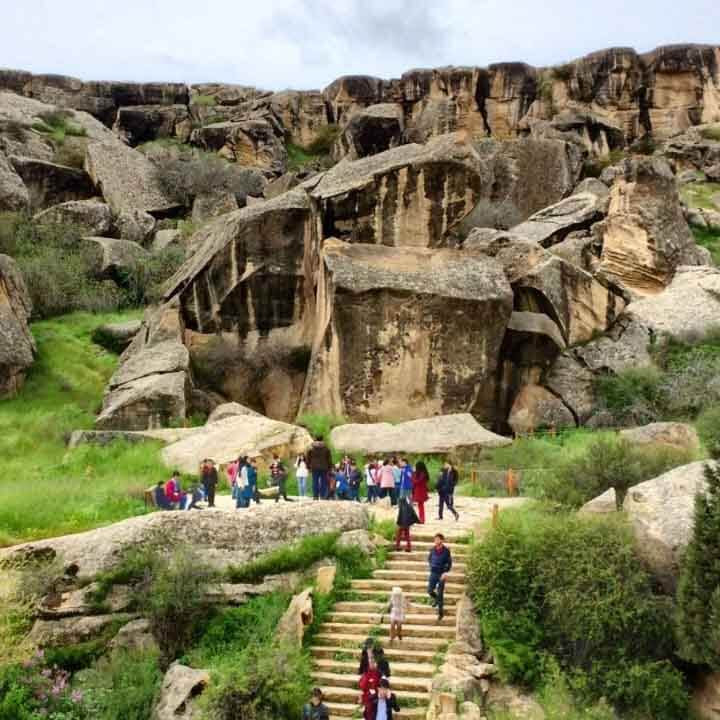 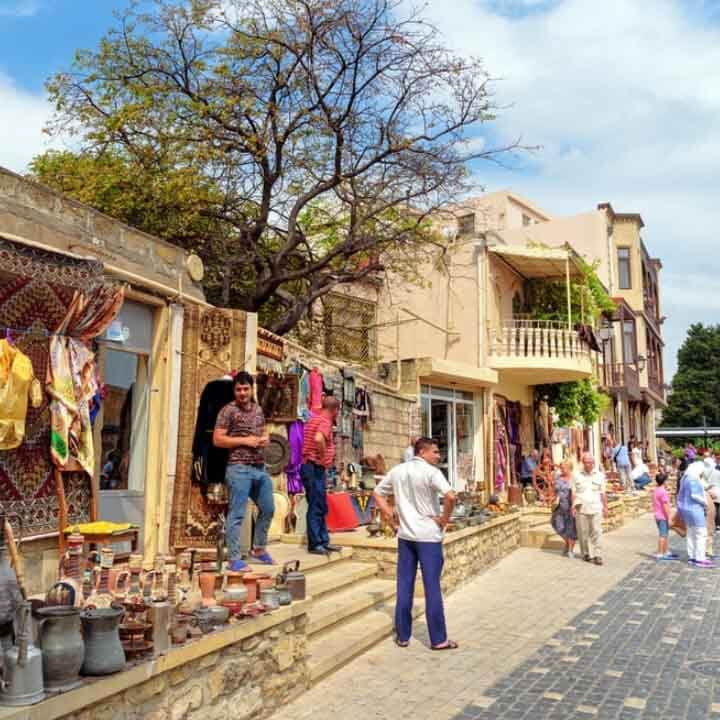 Transfer from Airport to Hotel

Walking through Baku Boulevardwhich stretches along a south-facing bay on the Caspian Sea. It traditionally starts at Freedom Square continuing west to the Old City and beyond. Since 2012, the Yeni Bulvar (New Boulevard) has virtually doubled the length to 3.75 km.

08:30Proceed to Departure to Gabala, the north-west of Azerbaijan The distance up to Baku 225 km (3hours)

Tour In Gabala: Excursion in: Tufandaq”Winter-Summer Tourism Complexoffers cable car rides at any time of the year, skiing on the ski tracks of different difficulty level, ski training and ski school, catering service (cafe and restaurants), entertainment centres for kids, hotel and other services

Nohur Lake-It is located in Qabala, another region of Azerbaijan that one passes when travelling to Sheki. Lake is not on the way but if you go a bit deeper towards the mountains this beautiful view opens up in front of you.

Breakfast  at the hotel

10:00Tour starts with Qobustan which is best known for being the home to the famous rock petroglyphs .The area has been settled since the 8th millennium BC. It is known for hosting thousands of rock engravings spread over 100 square km depicting hunting scenes, people, ships, constellations and animals. Its oldest petroglyphs date from the 12th century BC. In 2007, UNESCO included the ‘Gobustan Rock Art Cultural Landscape’ in the World Heritage list.

Visit to the Bibi-Heybat Mosque– historical mosque in Baku, Azerbaijan. The existing structure, built in the 1990s, is a recreation of the mosque with the same name built in the 13th century by ShirvanshahFarrukhzad II Ibn Ahsitan II

Start Start shopping in Park Boulevardwhich is a multi-story shopping mall located on Baku Boulevard, downtown Baku, Azerbaijan.The mall is located 5 minutes of walking distance from Sahil Metro station of Baku Subway and Government House of Baku. The building has all architectural attributes of the East and modern art of the West. It consists of six floors, including two underground floors. The general area of the mall is 17,000 square metres. It also has a parking lot for 550 automobiles

10:00Our tour program starts with Old City or Inner City is the historical core of Baku, the capital of Azerbaijan. The Old City is the most ancient part of Baku, which is surrounded by walls were well protected. In 2007, the Old City had a population of about 3000 people. In December 2000, the Old City of Baku, including the Palace of the Shirvanshahs and Maiden Tower, became the first location in Azerbaijan to be classified as a World Heritage Site by UNESCO(walking tour)

Later experience the happening street of Nizami Streetknown for Shopping.The Street’s history could be traced back to Baku's town-planning project of 1864. The street runs through the city's downtown from west to east. It begins from Abdulla Shaig Street, in mountainous part of the city and ends at railroad bed on Sabit Orujov Street, near a monument to Shah Ismail Khatai in “Black City”.

Tour continues with the visit to the charming example of modern achticture - The Heydar Aliyev Center– a 57,500 m2 building complex in Baku, Azerbaijan designed by Iraqi-British architect Zaha Hadid and noted for its distinctive architecture and flowing, curved style that eschews sharp angles. The center is named after Heydar Aliyev, the first secretary of Soviet Azerbaijan from 1969 to 1982, and president of Azerbaijan Republic from October 1993 to October 2003. (Photo shoot outside)

Based on Persian and Indian inscriptions, the temple was used as a Hindu and Zoroastrian place of worship. "Atash” is the Persian word for fire. The pentagonal complex, which has a courtyard surrounded by cells for monks and a tetra pillar-altar in the middle, was built during the 17th and 18th centuries. It was abandoned in the late 19th century, probably due to the dwindling of the Indian population in the area. The natural "eternal flame" went out in 1969, after nearly a century of exploitation of petroleum and gas in the area, but is now lit by gas piped from the nearby city

Trip to "Fire Mountain "-"Yanardag" -a mountain on Abs heron peninsula, 25 km from north of Baku.Literally, word "Yanardag" means "Blazing Mountain". Blazing bodies of flame dance on stones and floor.  Yanar dag is a natural gas fire which blazes continuously on a hillside on the Absheron Peninsula on the Caspian Sea near Baku, the capital of Azerbaijan, which itself is known as the "land of fire."

Tour continues with a visit toBibi-Heybat Mosque which is a historical mosque in Baku, Azerbaijan. The existing structure, built in the 1990s, is a recreation of the mosque with the same name built in the 13th century by Shirvanshah Farrukhzad II Ibn Ahsitan II, which was completely destroyed by the Bolsheviks in 1936. The Bibi-Heybat Mosque includes the tomb of Ukeyma Khanum (a descendant of The Islamic Prophet Muhammad), and today is the spiritual center for the Muslims of the region and one of the major monuments of Islamic architecture in Azerbaijan

12:00 Check out Hotel. Transfer from Hotel to Airport at around 3 PM.